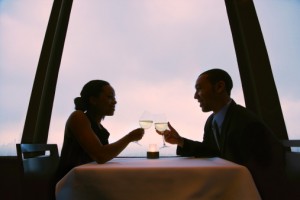 Not too long ago, I realized too late that I had picked the wrong restaurant for a first date I initiated.  The ride was too long and the conversation dwindled to silence on the way back home because things had not gone well.  We had sat in the restaurant for almost two hours, and it seemed I had done all the talking.  I was thrilled to be out with him, but I wondered what he was thinking.  Suddenly, he didn’t appear as interested as he’d been before.

He had been the perfect gentleman, but aloof all evening.  I was worried that perhaps I had said too much when we were at dinner.  I had made up my mind to ask him out again, but I was having second thoughts.  Maybe I should wait….  I had been admiring him for a long time at work, but he seemed shy, yet somewhat interested.    He would flirt with no follow-up.  So, I asked him out to get to know him better.   I felt certain that he accepted out of mutual interest, but after such a dull evening, I wasn’t sure.  At the end of the night, it was obvious he changed his mind and was no longer intrigued.  But I had to know for sure.

As we passed familiar streets, I realized my time was running short.  I knew I would be home soon and forced to say goodnight at the door.  It had been a while since a word had been spoken.  I decided to be bold.

“Am I your type?”  I asked without looking at him.

“Perhaps as a friend,” he replied in a strained voice.  It was obvious he was stretching to be polite.  I tried to hide my disappointment, but I had my answer.  I wondered how I’d blown it.  Suddenly, I remembered the disgust in his eyes when I expressed my disdain for guys who were sports fanatics.

For a moment I felt angry.  As I stared out the window at the cars whizzing past, I tried to focus on his flaws.  I didn’t like his sweater, which seemed of poor quality, and he had eaten like a pig at dinner.  But deep down, I knew I had messed up.

As he sped faster toward my apartment building, I recalled something my brother had said once about how a woman can “blow her pretty” by making dumb comments.  Unfortunately, the last two dates I’d been on ended the same way, only they had asked me out.  On both of those occasions, I believe my strong opinions, which I had no problem voicing, had been my downfall.

I told one guy, an attorney I was trying to impress, that I preferred a man who worked with his mind, instead of his hands, and his eyes reflected fury when he proudly informed me that his father was a carpenter.  He didn’t talk on the ride home, or say good night when he reached my door.

Thus, I have resigned myself to keep my opinions to myself on future dates or get some new ones that may prove to be more acceptable.  One thing is for certain, I’ll never again ask a guy out, or set myself up to get my ego crushed, especially when I’m paying for the dinner.