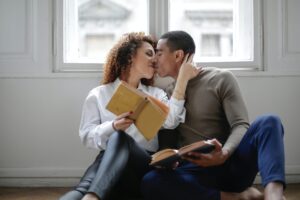 Is Your Best Friend’s

When a friend confessed that her new secret lover was actually the ex-fiance of one of our best friends, I was shocked.  We had all been close friends since high school, and I couldn’t believe it.

We were at lunch when she whispered as if someone else might be listening, that she had been dating him for the last eight months, and hadn’t told a soul.  The three of us were the kind of friends who shared almost everything, especially our romantic lives, and we trusted each other implicitly.

In this case, we both knew all the explicit details of our friend’s bad breakup and the public indiscretions he subjected her to.  She’d spoken often of how she’d caught him out with the same woman over and over again.  In fact, she eventually dumped him because of his cheating, and his refusal to end a “friendship” with an ex-girlfriend he’d been dating off and on since college.

I stared at my friend across the table, as if she had horns on the top of her head.  When I accused her of disloyalty and deceit, she became defensive. I didn’t understand how as a friend, (who knew how much her friend loved this man and endured such heartache from him,) she could end up taking him as a lover behind her friend’s back.

For the first time since we’d been friends, she suddenly felt like a stranger, and I made the decision to distance myself from her.  I couldn’t believe that she could listen to the heartfelt pain of a close friend while advising her on what to do, and then end up betraying her with the guy who was the source of her frustration.

On the way home, I called my sister and told her about it, and she ended up further adding to my aggravation by stating that there was nothing wrong with dating a friend’s ex-boyfriend, because it was over.  She accused me of overreacting.

Later that evening, at the usual monthly gathering of my investment club, I was still angry and decided to pose the situation to the group of women there to gauge their reaction.  I was surprised by their answers.

Out of the nineteen women there, only five agreed with me.  The rest felt that a friend’s ex-fiance should be an open game for whoever was interested.  One stated that once she was through with a guy, it wouldn’t bother her if a friend took up where she left off.  Another claimed that the ex-wife should be told by her friend that she was seeing her ex-lover because the real deceit came in keeping it a secret.

One admitted to not only dating her best friend’s ex, but marrying him, and that though it cost her the friendship, she said it was worth it.  What do you say?