How To Tell He’s Cheating … 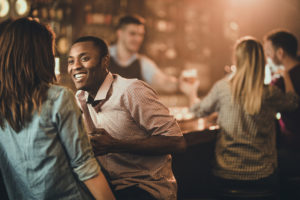 Sandy: “My boyfriend was fooling around with my sister-in-law, (my brother’s wife) and I didn’t know, but I did know.  I could tell by the attention he gave her and his demeanor toward me, that I was no longer special.  I’m just glad I ended the relationship before I walked in on them at a cousin’s wedding reception.  I believe women are psychic.  My brother never saw it coming.”

Carla:  “I believe strongly that a woman should always follow her intuition or that sinking feeling in the pit of her stomach when she feels her man may be cheating on her.  I made the mistake of ignoring that feeling when I was married, and it turned out that my ex-husband was heavily involved with a friend, who visited my home regularly.”

Sara:  “When I suspected my guy was seeing someone else, I became more observant.  It turned out I was right.  You don’t have to be a rocket scientist to know when your lover’s attention is being either divided or diverted.  I discovered he was still dating an ex-girlfriend when I followed him one night.”

Jennifer:  “I was once involved in a triangle relationship that included my best friend, though she didn’t have a clue, and I convinced myself that it was better than being alone.  At the time, I didn’t realize I was cheating on our friendship.  When I realized how low-down it was, I ended the relationship and thus ended the misery in my life.”

Marilyn:  “If we had a culture of women who refused to cheat with these guys, it would make a huge difference.  It makes it bad for women who are trying to nurture monogamous love and build families.  In the last year or so I’ve said “no” too many times to married men and guys living with their girlfriends.”

Naomi:  “I was out on a third date with a guy who I was really impressed with.  In an effort to impress him, I pretended to be far more liberal than I was and I paid for my mistake. When we arrived at his apartment that night, I was introduced to his live-in girlfriend, who was waiting on us dressed in a negligee.  I was invited to spend the night.   But I declined.”  Translation:  Some people cheat and it’s OK with their partners.  In fact, it’s not viewed as cheating, it’s called “an open relationship.”