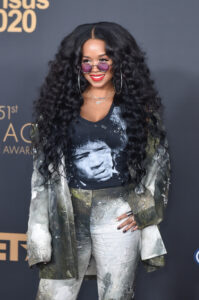 Gabriella Sarmiento Wilson, 23, known professionally as H.E.R. (pronounced her, an acronym for Having Everything Revealed), is an award-winning singer and songwriter. After initial music appearances and singles under her real name, Wilson re-emerged in 2016 as H.E.R., releasing her debut EP H.E.R. Volume 1 under RCA followed by four subsequent EPs. Her first compilation album H.E.R. (2017), consisting of tracks from her first two EPs plus six additional songs, was nominated for five Grammy Awards, winning Best R&B Performance and Best R&B Album.

Gabriella Sarmiento Wilson was born in Vallejo, California to a Filipina mother and an African American father. Raised in California’s San Francisco Bay Area, performing as Gabi Wilson, she was introduced to the public as an artist as a young child, covering Alicia Keys on piano on the Today Show.  She appeared at the famed Apollo Theatre in NYC on September 23, 2007, covering Aretha Franklin’s “Freeway Of Love.”  She made her acting debut at the age of nine, starring in the Nickelodeon TV film School Gyrls.  At this time she was managed by Will Smith’s Overbrook Entertainment. She performed at the 2010 BET Awards covering Keys’ “Fallen”, sung a tribute to Keys at the ASCAP Awards, and competed on Radio Disney’s The Next BIG Thing at age 12, with her song “My Music” featured on Radio Disney.

In 2011, Wilson signed a record deal with Sony’s RCA Records via MBK 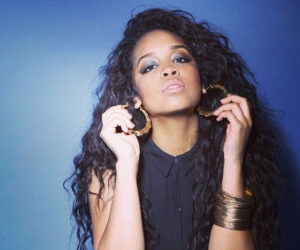 Entertainment at the age of 14, later releasing her debut single titled “Something to Prove” under her real name.  Re-emerging in late 2016 with a new persona, Wilson released her debut EP, H.E.R. Vol. 1 on September 9, 2016, produced by songwriter David “Swagg R’Celious” Harris. She received support from Usher, Tyrese, Pusha T, and Wyclef Jean, while label-mates Alicia Keys and Bryson Tiller helped get the word out through Twitter co-signs shout-outs and re-posts.  In April 2017, Rihanna posted an Instagram clip with H.E.R.’s track “Focus” playing in the background. The clip has been viewed over 5 million times. Additional public support came from Issa Rae, Taraji P. Henson,  Kylie Jenner, and Kendall Jenner.

NPR listed H.E.R. Vol. 1 as the first selection in its “5 Essential R&B Albums You Slept On” Rolling Stone included H.E.R. in its March 2017 “10 Artists You Need To Know” roundup. Forbes named her one of “5 Alternative R&B Artists to Look Out for in 2017.” H.E.R.’s image still remains a mystery.