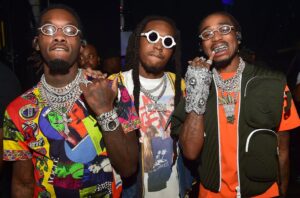 Migos is an American hip-hop trio from Lawrenceville, Georgia. They are rappers, singers, and songwriters. The group, founded in 2008 is composed of three rappers known by their stage names, Quavo 30, (born Quavious Keyate Marshall), Takeoff  27, (born Kirshnik Khari Ball), and Offset 29, (born Kiari Kendrell Cephus). They originally called themselves the Polo Club. The three members are directly related and were raised together by Quavo’s mother.  Quavo is Takeoff’s uncle, and Offset is Quavo’s cousin. The three of them grew up in suburban Atlanta. “I ain’t going to sit here like, ‘My neighborhood was hard, and I had to get out there and grind.’ We made it hard for ourselves. We chose to stay on the streets,” Quavo said.

The group released their breakout debut single “Versace” in 2013, taken from their mixtape Y.R.N. (Young Rich Niggas). The single was produced by Zaytoven and peaked at number 99 on the US Billboard Hot 100 chart.  Later that year, Canadian rapper Drake brought the single more recognition when he remixed the song, adding a verse, which he would later perform at the 2013 iHeartRadio Music Festival.

They went on to release several more singles, that became four Billboard Hot 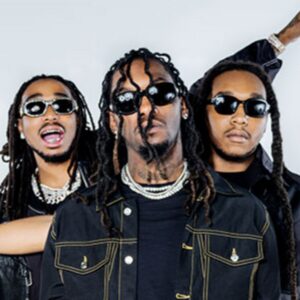 Migos released their debut album Yung Rich Nation in July 2015. Their second album, Culture was released in January 2017 and debuted atop the US Billboard 200 chart. The group later signed a deal with Motown and Capitol Records in February 2017 and followed up the latter album with Culture II in January 2018, giving the group their second number one album in the United States.

Now, they’ve just released their latest album to rave reviews and it looks like you can count JAY-Z as a fan of Migos’ Culture III album.  On June 11, Quavo shared a screenshot of a congratulatory text Hov sent him following the release of the album, which marks the third installment of the Culture series. In the text, Jay specifically notes “Avalanche,” which is one of the stronger tracks on the LP.  “That Avalanche song is beautiful,” reads one part of JAY-Z’s text. “Congrats to you and the guys on the album. Peace God!”  Quavo was quick to offer up a response to the Roc Nation founder. “Thanks OG,” Quavo wrote in his response text. “We Put Everything We Had Into This One.”