The Dating Chronicles – The Unspoken Reason 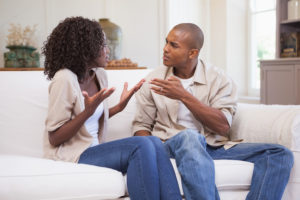 Jill closed the door quietly and leaned her back against it.  What she had feared the most, had finally happened. Steven had come to end their relationship and had left without looking back at her.  She was heartbroken, though she had never felt the intensity of love from him that she so longed for.  He had always been kind.  But he emanated an aloofness that forged an implied distance between them.

It seemed that while she labored to establish a bond of commitment, he inched farther back into a wall of mystery that blocked her efforts.  Now, as she heard his car pull away, the tears rushed forth in a stream of anger as she heard herself scream out in anguish.  She dropped to her knees in the plush carpet, as flashbacks of all the times she had worked so hard to make a man love her flashed before her eyes.  And it had all been in vain.  She had cooked, cleaned, washed and bought for every man who had crossed her heart and they had all ended up leaving.

But Steven had been the one she invested the most in.  She had financed his pursuit of his undergraduate degree and had underwritten his child support payments when his money was short.  And now he was gone and she was alone again and for the fifth time in a row….she didn’t understand why.

Steven blew on the horn longer than was his norm when a motorist cut him off.  But he was frustrated to no end.  He had just left Jill’s apartment and he knew he had hurt her, and he regretted it with a passion.   Jill had been in his life for the last three years and he had tried to love her…..but he couldn’t.  Jill had been pretty when they first met her, with a figure that could stop traffic.  But as time passed, her looks could not compensate for her fervent need to be loved and her manipulative ways.  She had used everything in her power to seduce him with money, gifts and acts to the extreme.

As he drove along, he recalled how he had first got hooked, when two weeks after they met, she surprised him at work on his birthday with balloons and a pre-paid dinner certificate to his favorite restaurant.  He ended up spending his birthday with her, instead of Cheryl, whom he had made plans with.  He had been dating her for two months when she bought him a diamond ring with her initials on it.

His mother often referred to her as the most manipulating woman on earth, because it seemed that she would do anything to win his affection.  She did win his presence, but not his heart.  He had stayed with her until now, out of what his friend Ted called, “perceived obligation.”

She gave and he took.  But, after he met Julie, he could no longer stand to be with Jill with his mind on Julie.  So he did what he had to do.  But as he neared Julie’s house, he made up his mind to never to do it again.  The pain on Jill’s face would haunt him for awhile