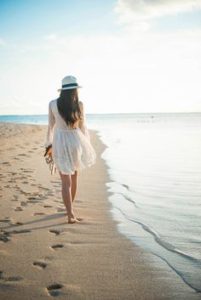 Can Be An Adventure

According to Solo Traveler World, statistics that more single women are foregoing group or family travel in favor of solo trips.   Studies show that over the last four years, 75% of solo travelers were women, while men were 25%.  These women are refusing to miss out on the possibility of fun and adventure for lack of a traveling companion. Some are enjoying adventure and romance in some of the most exotic places in the world.

Hong Kong, China:  Marianne, a single lawyer from Philadelphia had always wanted to visit Hong Kong, but not one of her friends could afford to go.  So, she went alone.  She’s apprehensive but determined to do something she’s always wanted to do.  She is sitting in a restaurant looking out over the water when the waiter brings a bottle of expensive wine to her table and points to a handsome stranger four tables away.  “Compliments from the gentleman,” the waiter says in broken English.  She looks at the stranger across the room.  He appears Japanese.  She nods a thank you.  She is flattered, but suspicious “Why would a Japanese guy flirt with me?” she asks herself.  She resumes eating and struggles to keep her eyes on her plate.

Ten minutes later, he is suddenly standing in front of her table.  “You are a beautiful woman,” he says in perfect English.  “May I know who you are?”  She smiles nervously while reaching for her purse.  Nervously, she gives him her card.  She doesn’t speak.  She is certain that he is the head of some local espionage ring interested in having her smuggle something into the States or a guy looking for a girl for the evening.  She prepares herself to throw off the advance.  She looks up at him but does not return his smile.  He accepts the card with a full stare, nods, and walks away without uttering a word.

She goes back to the hotel but is intrigued by the encounter with the handsome stranger. There is something about him that stays with her.  She had never looked at a man outside of her race and she is surprised by the lingering attraction.  When she leaves Hong Kong a week later, after experiencing a wonderful adventure of shopping and sightseeing, his face flashed before her in the airport.  She realizes she had a strange encounter that she’ll never forget.  She feels beautiful as she boards the plane and waves goodbye to this beautiful country.

Two months later, she’s at work poring over the usual papers, when the phone rings.  It turns out to be the handsome stranger from China, who’s in Philly on business.  After ten minutes of friendly dialogue, he invites her to dinner.  She’s leery but fascinated.  At dinner, she finds out that he is a banker from New York, who happened to be in Hong Kong on business.  He tells her that he has not stopped thinking of her since he first saw her. They begin dating.  A year later, they are married in Philadelphia and again in Osaka, Japan, at the home of his parents. He is five years younger than her.

Ibadan, Nigeria – Lynne is a 29-year-old photographer from Chicago, who was visiting this country alone. In the gift shop of the hotel, she meets a young local businessman.  His charm and good looks are captivating and she enjoys the flirtatious banter.  Later, she bumps into him in the hotel’s restaurant.  He is with a group of friends, but he leaves them to join her.  His dimples intrigue her and his eyes sparkle as he entertains her with African folklore.

For the next six days, he becomes her guide and personal escort.  As she travels throughout the country in his jeep, she pinches herself to reinforce the reality of the hour.  She is overwhelmed by what she sees and learns and mesmerized with her companion.

When the time comes for her to return to the States, she suppresses her emotions.  She has fallen in love, but she feels stupid.  He has shown that he enjoyed her company, but there is no indication that the feeling is mutual.  On the way to the airport, it is all she can do to keep from bursting into tears. She looks at him and decides there is nothing back home to go to.  She wishes she could stay.  She stares at the road in silence. His face is impassive. Neither are talking.

At the departing gate, he starts to say something and changes his mind.  As she walks through the turnstile and turns to wave goodbye, he walks up and grabs her hugging her tightly.  He whispers in her ear in Yoruba, (his native tongue).  Fighting back tears, she asks him to translate for her what he has said.  “I love you, my beautiful one,” he repeats in English. “Will you stay here and become my wife?”  She screamed in joy.  “Yes! Yes!” She burst into tears and laughter at the same time.  They were married a month later.