Fit To Marry? Many Are Not … 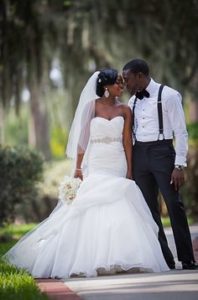 Is it true that African-Americans are the most uncoupled people in the country?  If so, what’s the problem?  No one can quite put their finger on it. According to studies, out of all the racial groups, Africans-Americans are the least likely to marry or stay married.   However, statistics show that the divorce rate among all Americans is currently at 50%.

Since June is the month for The Marriage Walk.  We talked to a few folks who jumped the broom into the land of happily ever to gain some insight and this is what we learned.  Some did well…others didn’t.

Bob, 34 – married two years, divorced.  “Marriage didn’t work for me, for several reasons.  I realized too late that I wasn’t really ready to share my space.  We ended up moving into my apartment, which was too small.  Also, I really didn’t understand how close she was to her family, and they were always underfoot.  Though we discussed money beforehand, she reneged on our agreement and wanted to keep her money to herself.  In the two years, we were married, we argued every day about money.”

Marianne, 29 – married four years.  I love marriage because I went into it with a plan.  I didn’t sleep with my husband before I married him.  Therefore, sex was an adventure from the beginning and still is.  We moved into a townhouse, so we could have a lot of space, and it was very important to me to marry a guy who was also my best friend.  I believe my marriage works, because unlike many women my age, I prayed and asked God to send my real soul-mate, and He did.  We also did pre-marital counseling.”

Cliff, 39 – married twice, divorced twice.  “I think marriage is not for wimps.  It cannot be entered into with a fantasy mentality.  Looking back, I realized I used bad judgment twice in a row.  I married the first one because she was pregnant with our second child.  I didn’t really love her, but we had been together a while.  I knew after three months, I made a mistake because I couldn’t stand the sound of her voice.  I married the second one because she was good for me and to me.  She inspired me in many ways, but I really didn’t have a passion for her.  I realized too late that I loved her, but I wasn’t in love with her.  When I do it again, I’ll be a lot smarter about meeting all of my needs.”

Nicole, 36 – married six years.  “I think it’s foolish to marry unless you have a clear understanding of what you’re doing.  Marriage is compromising at its highest degree, I think so many marriages don’t work, because most couples aren’t prepared to leave the total freedom of single living, for the confines of marriage.  Personally, I had to get adjusted to letting go of my free will spending habits.  I also think our marriage has worked, because there are three of us in this marriage.  Me, him, and God.  We never go to bed angry, and we deeply respect each other.”

Alan, 41 – married three times. “I finally got it right this time, and I brought the lessons into this marriage, I learned from the previous two.  I cheated on both wives because I became bored with the routine of marriage, and the lack of real compatibility.  My first wife and I were never able to be intimate outside the bedroom, and my second wife and I just couldn’t get on the same page about anything.  Now, I’m with the ideal woman for me.  Our values are in sync, and we complement each other, and we have never had an argument in three years of marriage.”

Terri, 33 – married once, divorced.  “I went into marriage with dead brain cells.  I married the first guy who asked me.  I also married a man who made less money than me, was very domineering and unfaithful prior to the marriage.  But I wanted to be married, so I allowed his sexiness and my needs to mask his flaws, which were many.  I blame myself for my choice, because like many women my age. (I married at 39)  I longed to be a bride with a handsome groom at my side.  I wanted to flash the big diamond ring (which by the way, I had to loan him money to buy) to all my girlfriends who were waiting to be chosen, and most importantly, I just wanted to be a Mrs.   I paid a high price for my bad decision.  I would probably still be married, if he hadn’t deserted me on a night when I was very ill, to go to a Super Bowl party.  I was more committed to remaining a Mrs. than I was to my own peace of mind and happiness.”

Peggy, 40 – married twice, divorced.  “I like being married, but I have never been smart about relationships.  I don’t think I’ve ever been in love, but I enjoy men who make me feel special.  Unfortunately, “the romance factor” always wore off for me when the reality of having to consult another person about personal matters took over.  I was never comfortable with the financial arrangements that come with marriage.”