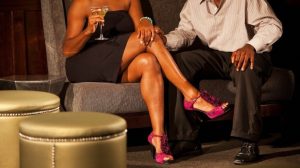 Ivan:  “I’ve found that a person either likes you or they don’t.   I have purchased gifts for women in high volume in desperate times to help sway feelings my way that weren’t there in the first place.  It finally hit home, when a schoolteacher  told me on her doorstep after an expensive evening out, that we could only be friends, because “you try too hard to be liked, and I want a guy who is certain of his likeability.”

Denashia: “After chasing a beautiful woman for months, we finally went out.  After the date, I realized that she wasn’t my style, so I didn’t call again.  When she called me, I didn’t answer her calls.  Finally one night, I ran into her at a party and she begged me to tell her why I had changed toward her. When I told her that was just no chemistry between us, she went outside and smashed the windshield on my car.”

Ava: “I went on a first date with a guy who rubbed my knee under the table all during dinner. I didn’t move my leg or resist the act because I was afraid he would be offended, even though I was very uncomfortable.  Later, when we got to my door, he became angry when I wouldn’t let him come in and claimed that I led him to believe that I wanted him.”