Bold Moves: 4 Ways To Get A Date With Him… 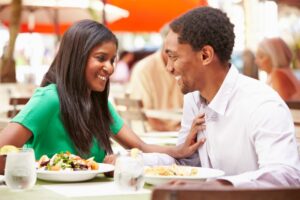 A Date With Him

It seems so simple: If you like someone, and you want to take him or her out on a date, you just ask. We all know, however, that it’s much harder than it looks—which is why most of us clam up, bow out, fidget, mumble and fumble at the moment of truth. But those days can soon be history. The key? Take your mind off the possibility of rejection by adding a little more life to your next invitation. Here are ways to ask someone of interest out that are so new, different, and unexpected that your askee will just have to accept!

Ask your intended out on paper…or a paper napkin

If you’re out at a party and notice an attractive person standing nearby, whom you’d like to meet…put the cocktail napkins to good use. Grab a pen, and write down, “Would you like to go out next week?” with a “Yes” box and a “No” box beneath it. Fold up the napkin note and pass it to him or her with the pen.

Pull your own “To Be Continued…” episode

The less you know the person you’re asking out, the better off you are with this technique. While no one is saying to ask out a total stranger of course (for safety’s sake), this is a good approach if you’re attracted to a friend of a friend when, say, you’re all out at a bar or party. Start a story, then stop partway through, look them dead in the eye and say, “Oh, this is a two-part episode. To hear the other half, you’ll have to tune in over dinner.”

Why do I know this works? Because a guy I recently met in a bar used something similar on me a few months ago. We’d been talking about traveling adventures we’d had, and he said, “I have two funny stories about that.” After finishing his first story, he said, “As for the second story… well, I’ll tell you when we go out for dinner.” We’ve been going out ever since.

The next time you want to ask out a stranger you meet at a bar or party, up your chances of getting a yes by upping the fun ante. Say to him or her, “I’ll play you in a game of pool. If I win, you take me out. And if you win, I’ll let you take me out.” Then let the game begin!

Be specific and straight-up

Whether you want to ask out a stranger, a friend, or someone you’ve struck up a conversation with at a party, go bold. Replace a wishy-washy line like, “So yeah, we should hang out or something soon, you know?” with a far more straightforward, “Would you like to get sushi with me next Thursday night?” No mixed messages, no fumbling for words, and oozing with confidence… and that’s something every date askee wants to hear.