The Triangle Tryst – When 3 Is Not A Crowd 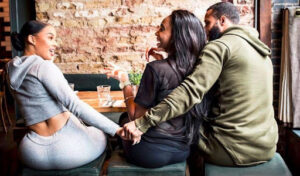 My friend Tori has been in an open triangle relationship for over a year, and she claims to be satisfied with the arrangement.  In other words, her guy has another girlfriend that she knew about upfront, and she’s cool with it.  He divides his time and she accepts it.  Her rationale is that she’s not interested in getting married, and this scenario works well for her lifestyle.  Tori informed me that more and more single women are opting secretly to be the third wheel in a relationship, but are not necessarily open about discussing it.  However, I found three women who were.

These women were quite candid about their relationships.  In assessing their conversations and personalities, I found they had quite a bit in common.  All three admitted to being quite aware that they were in fact “the other woman.”  I found their psyche’s justification to be very interesting.  Here are their stories…

A recent study showed that 35% of the women polled on their expectations of marriage felt that man-sharing was an inevitability that most women can’t avoid.  Interestingly, the similarity I found among the women was that they had no real moral code they subscribed to.  None were afraid of being infected with any sexually transmitted disease.  All three had never been married and were highly educated.  But the common thread that tied them together was that they were all afraid of being alone or without a man.

Each woman had a wild story about their encounter with the “third wheel” in their relationship.  One woman told of driving her boyfriend’s car and parking it in a shopping mall.  When she came out “the other woman” was sitting behind the wheel waiting on her.  They spoke candidly about their relationship with the same man, but the woman who had driven the car there ended up taking a cab home.

“I left the car to her, because I didn’t want no drama.  When I walked away, I vowed to myself that I’d never see him again.  But when he called that night and told me that he loved both of us, I signed back on for the ride, though I often fluctuate between misery and ecstasy.”