Single Sketches: The Meet Market – Who’s Out There? 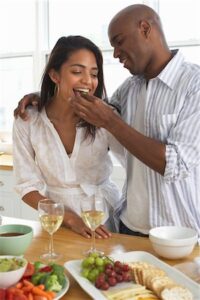 I once dated a guy who was quite successful at convincing me that I was very special to him.  He was super-attentive and very spontaneous about sending flowers and surprising me with concert tickets to see my favorite artists. Therefore, I was shocked to learn after several months of being involved with him that he had hit on both my best friends and had tried to bribe my sixteen-year-old niece with $50.00 to have sex with him.

Like many people, he bore the face of evil, but it was hidden by a mask of charm and kindness.  As I reflect on him, I realize that if he’d asked me, I would have married him without knowing who he really was.

The world at large is filled with people who put on a daily face to disguise their true identities.  They usually strive hard to camouflage the real person for several reasons.  Fear, low self-esteem, deceit, and insecurity are but a few.  What about you?  Do others usually see the real you, or the face you put on for public consumption?  There are some I know who hide their true faces behind a mask.  The names, of course, have been changed:

Caryn exists only to be married and taken care of by a man.  Throughout her home, cookbooks are scattered among brand-new tablecloths waiting to complement an elaborate table setting for two.  She has also mentally consumed every available book on manners, etiquette, and entertaining at home.  Caryn wants to be a “society wife,” but she is a strict homebody, who never goes out socially.  She is dependent by nature, yet she has cultivated the art of playing “the independent woman.”  However, when she meets a man, she makes up a life that consists of being busy, much sought after and highly regarded, yet she suffers from severe loneliness.  She wears the “I’m living life to the fullest” face, but deep down she feels passed over, denied, and inadequate, because of a failed relationship she never got over.

Paul is very handsome, yet very insecure.  Each statement or action is calculated to be clever and charming.  He enjoys the roar of the crowd and all eyes on him.  He works hard for approval with wit and charm, and the source of admiration is irrelevant.  He worries about being viewed as dull.  Therefore, he is always on in a crowd, and when there’s no adoring audience around, he becomes sullen, withdrawn, and bored.  He is constantly in search of new eyes and ears to conquer.  He wears the “pay attention to me or I will move on in search of new applause,” face.

Jan is very attractive but feels that because she has a certain mindset, her actions give total access to her way of thinking.  She is paranoid and lacks confidence in her appearance and natural ability, so she wears a defensive shield of armor to ward off expected rejection.  In relationships, she waits to be rejected, and it usually happens, because she believes she is basically unacceptable as a mate.  She wears the “I don’t have time for love” face, but she owns practically every romance novel ever printed.

Barb resents the social stigmas attached to being black, so she scurries to rid her environment of all stereotypical connections.  She views the mention of African heritage as an insulting reference to her well-bred background.  She spends an inordinate amount of time grooming herself and her values to fit what she views as Anglo expectations.  She prefers a white mate or “light-skinned” substitute who’s in the market for “exotic” beauty.  She wears the “I’m black, but I’m not one of the” faces while sporting blonde hair and green contact lenses, and often lapses into a fake British accent when out socially.

Nate is reasonably attractive and understands the power of a sincere and sensitive posture.  These traits are high on the request lists of single women everywhere.  He is also aware that fear and apprehension play a major role in affecting new relationships.  Therefore, he exerts tremendous energy into being the ideal Mr. Nice Guy.  He is a con man, who lures his victims into a false sense of security by pretending to be a head above the rest of the “no-good scoundrels. Then he dumps them after he has mentally and physically abused them.  He collects and discards women as a hobby. Yet he wears the “don’t worry, I won’t hurt you” face.

Beth desires to be viewed as “different” in the eyes of men.  Though she is pretty, she is very competitive with other women.  She sculptures a façade of being the ultimate in femininity and puts on an alluring persona when she steps out the door.  Meanwhile, she walks alone, dines alone, and cries alone, because she has low self-esteem and is very insecure.  She doesn’t engage men in conversation…she “dangles” in front of them.  She works hard to be the opposite of what men may view as typical in a woman.  She wears the “I am the best you could find in a woman” face while shunning friendships with other women, and spending a lot of time in self-doubt.

Tony appears charming, but he adjusts his personality to fit the occasion.  He says and does what he thinks is appropriate for the company he’s in and the occasion.  He has been pretending so long to be an all-around “Mr. Everything,” that he finds it difficult to remember who he is anymore.  He wears the “I do what it calls for” face because he is more concerned with pleasing others than pleasing himself.  No one knows what he really thinks, and often he’s not sure either.  Though he strives hard for popularity, he fails to achieve that goal.

Look around you at the people who only wear one face.  They are easy to spot because they appear to have no fear of exposure.  They like who they are.  They are indeed the “real” people.  However, they’re mostly in an exclusive club that requires only healthy self-esteem and the strength to be one’s self, to qualify for membership.  Meanwhile, be careful out there.