Money Matching – Should He Make More Than You?

Money Matching – Should He Make More Than You? 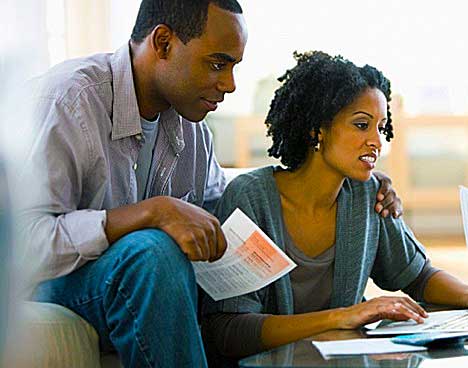 Studies show that one of the biggest challenges in marital relationships is money.  My mother used to say that “marriage usually begins with love, and ends with money.”  This month, marriages will be taking place all over the country, and money is probably not at the top of the concern list based on data gathered by The Marriage Institute of America.  I talked to several people who shared some interesting insight into the relevance of money when it comes to marriage, and the role it played in their marriages.

Joanie – “A man doesn’t have to have money for me to marry him.  He just needs a job and something to keep him busy.  I make enough money to keep both of us well.  I used to be married to a man who earned a lot of money, but he was never home and never a good husband.  My husband, a bus driver, is younger, more attentive, and more interested in being connected to me than achieving financial success, and that’s what I prefer.”

Ken – “When I was married, my wife felt that I should pay more of the bills because I made the most money.  I disagreed with that theory.  Before we got married, we debated back and forth about splitting the bills down the middle.  I explained to her that I was looking for a partner, not just a wife.  In the end, she agreed finally that we would split the bills down the middle, and contribute a set amount each month to a joint savings account.  However, she changed her mind immediately after the honeymoon, and her attitude about money destroyed our marriage.”

Liz – “When I got married, I was too naïve to discuss in-depth my husband’s financial picture prior to the wedding.  After we got married, I learned he was over $75,000 in debt and that his home (which we moved into) was in foreclosure.  I never asked the right questions, and he never volunteered to tell me what I needed to know.  I had never seen his check stub, and I was shocked to learn that he made far less money than I thought.  He was romantic and a nice guy, but he was totally irresponsible about money matters and was not interested in changing.  When I divorced him, I felt like a weight had been lifted off my back.”

Gena – “I think money is the second most important discussion a couple can have before marriage.  My attitude is old school.  I believe a man should be the major breadwinner in the home, and his wife should be the helpmate.  When I got married, I told my husband up front that I was only interested in paying the smaller bills in the house, ie., telephone, cable and electricity.  I didn’t need to get married to augment my lifestyle.  I was already living well.  My belief is that the man should be fiscally responsible for the household when he marries.  I’ve been married for five years, and my husband is content with our financial arrangement.  I think more couples would experience fewer problems with money if it were discussed before the wedding cake was ordered.”

Chuck – “Money is indeed the root of all evil.  It alone broke up my marriage because we couldn’t see eye to eye on how our money should be spent.  My wife put us into serious debt by wasting money on frivolous spending sprees.  Shopping was a sport for her, and she didn’t believe in saving money.  It was common for me to come home and find a new luxury chair in the living room and no food in the refrigerator.  Our bills were always paid late because she found something on sale.  When we divorced, she had the gall to ask for alimony, and she earned more money than me

Barbara – “I would advise anyone getting married to get a prenup agreement.  When I married the first time, we did a prenup, and I’m so glad we did because what began as a whirlwind romance ended up a disaster.  The marriage lasted three months, and he never contributed financially to the union.  When I married a second time, my husband at first felt affronted at the mention of a prenup, but because I had property, I insisted.  It’s just the smart thing to do because money plays a huge role in marriage and can easily destroy the love factor if it’s not managed properly.”