How One Woman Found Love On A Solo Travel Adventure… 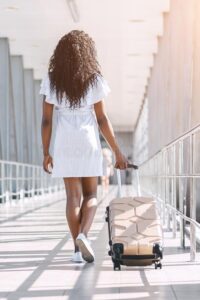 Found Love On A

I was 28 years old, living in Seattle, Washington, and was bored out of my mind with dating men who turned out to be jerks and girlfriends who lacked the energy and money to travel.  So, I decided to go away on my own to a place I had always wanted to go and had never been.  New York City.

I booked a room at The Plaza, but after arriving there, and changing rooms a couple of times, (I didn’t like the decor), I decided to check in at the Waldorf.  I wanted to stay at an upscale hotel because I felt the security would be better.

As I stood in line waiting to check in, I noticed a tall guy in another line staring at me, and I blushed. He was very handsome and dressed distinctly in a white suit. I didn’t see him again until the next day when I was walking across the lobby. He stepped in front of me and asked for directions to a nearby restaurant.

He explained that he was from California and was also in New York for the first time on business.  We got to talking, and he suggested we tour New York together and I accepted. At first, I was nervous about joining a stranger.  But then, I remembered that I had come in search of fun and adventure, and I decided to go for it. After all, I knew how to take care of myself.

We hit Broadway like two wide-eyed country bumpkins in a big city for the first time. When we got back to the hotel that evening, we parted because he had a meeting with a client. Later that night, he called me to join him for cocktails in the lobby bar, and we sat talking after the bar closed until 4:00 a.m.

For the next two days, we visited The Statue of Liberty, Ellis Island, and The Empire State Building, while stopping to eat hot dogs on every corner.  On the day I left, he took me to the airport and presented me with a silver bracelet from Tiffany’s that he had engraved with my initials and the date we met. He said he never wanted me to forget what we shared that summer.

When we got back home, we kept in touch through emails and texts, and a month later, he came to visit me with an engagement ring in hand.  We plan to marry next year on the date we met in New York.