Rege`Jean Page: Why Everybody Loves “The Duke” 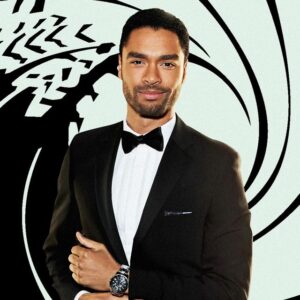 Unless you have been off somewhere in a foreign legion, you must be aware of the new heartthrob who has landed in the scope of women everywhere via the Netflix series, Bridgerton. This, of course, is due to this actor’s outstanding performance as the dreamy duke, Simon Bassett, aka The Duke Of Hastings. 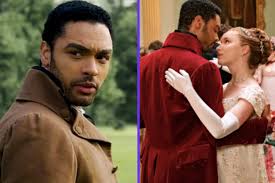 One reader put it well…”When he looks at a woman, it’s like he looks deep into her soul. He’s the quintessential leading man.” While Time Magazine destined him to soon appear on the Sexiest Man Alive list, others, this writer included, are binge-watching Bridgerton and enjoying watching the pure sensuality of a gorgeous black man on screen with piercing eyes. For many women across the globe, this 31 year old actor, born in Zimbabwe to interracial parents and raised in London, has lifted romance from the screen with a sensuous persona impacting their personal fantasies and his British accent only enhances.

His handsome looks are one thing, but his 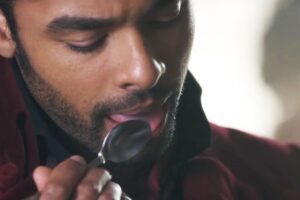 smoldering sexuality is another.  Example: His licking a spoon scene in the movie, which earned its own Instagram page has gained over 4000 followers so far. And reportedly, the followers on his Instagram page went from 4,000 to over 4 million after Bridgerton hit the airwaves on Christmas Day. Click photo to see video.

Of course, everyone wants to know if the steamy scenes between the gorgeous bachelor and his co-star Phoebe Dynevor developed into an off-screen romance.  In a recent interview the pair did with Access Hollywood, Regé-Jean insinuated that the two were close but were only romantic on-screen. “I think that everything you need to know is on camera. All the sparks that flew came off the beautiful scripts we were handed,” he explained. “So I think that the sparky words, scripts and material are more than enough.”  Did he answer the question?  I don’t know.

But speaking to Entertainment Weekly, Regé-Jean Page admitted that he’s softer and more open to romance than his fictional counterpart, Simon.  “I’m a huge fan of romance as a concept. Romance is a wonderful thing and we need more of it in the world. Most things at their core are love stories anyway, whether they realize it or not. It’s hilarious, the more seriously a show tries to take itself and detach itself from that, the more that the love story generally tends to come forward.”

In an interview with Oprah Magazine, he also explained the romantic power of the intensely held gaze in the ballroom dancing scene we see between the Duke and Daphne in the series.  “You have this space to flirt and communicate in private. Even though the eyes of the world are on you, it’s that little bubble of honesty between those two characters,” Page said.

The super-talented actor, who also played Chicken George in The History Channel’s, Roots, is also a musician. Regé Jean was in a punk band with his younger brother where he played drums and sang to vent his frustrations.  We’re just glad he switched to making movies.