Single Scenarios – What Should You Do? 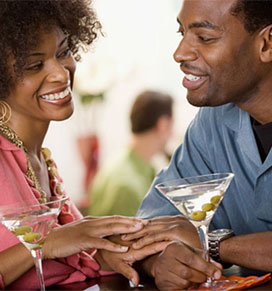 Scenario I:  You’re out with your date and he/she leaves you to talk to someone of the opposite sex. They are gone too long and your jealous button is hit.  You don’t like it.  You walk up, ignore the person they’re talking to, and pull them away. You express your dislike in no uncertain terms or you just sulk and say nothing.

WSYD:  You don’t go over at all unless you have something that can’t wait.  When you’re out, you allow your partner all the room they need to be sociable with others, unless it gets out of hand. If it does, you never confront…you just leave – which makes a much better statement than anything you could say.

Scenario II:  A business acquaintance introduces you to her significant other at a social gathering.  After they walk away, the thought occurs to you that he could possibly be a benefit to your work.  Later, when the two of them walk by you, you stop him by grabbing his hand and asking for his card. You ignore her and direct all your conversation to him.

WSYD:  You stop them both and explain your interest to both of them, ask him for permission to call him, and then ask for his card.

Scenario III:  You have a date with someone who you sometimes enjoy, but you’re not fascinated.  At the last minute, you change your mind and decide that there is something else you’d rather do.  You don’t call to cancel, because you can’t stand the drama.  You just don’t show up.  You make up your mind to make up an excuse/lie the next day.

WSYD:  Act like a grownup. Call the person and tell them the truth without the details.  If you decided you want to do something else, regrettably apologize for the last-minute cancellation, and say your plans have changed, and you’d like to make it another time. Remember, cowards lie and jerks just don’t show up.

Scenario IV:  You’re in a social setting, and someone pulls you over to be introduced to someone who strikes you as unattractive or uninteresting.  You don’t smile or look the person directly in the eye.  You nod and look away distractedly while shaking the person’s hand. You are not interested or impressed and it shows.

WSYD:  Remember, you’re being introduced to a person just like you.  You are gracious.  You do not judge anyone by their appearance.  You smile warmly repeating the person’s name for clarity, with genuine interest as you extend your right hand to shake and use your left hand to cup the handshake. You say with sincerity that you are pleased to have made the acquaintance, and you mean it. For emphasis on this point, think about how you’d feel if someone responded to you in the above manner.

Scenario V: Someone asks you to do something you really don’t want to do, i.e., a favor or to borrow money.  You lie and claim you don’t have any money, or other obligations prevent you from doing the favor.

Scenario VI:  Your girlfriend’s husband hits on you.  You are shocked.  You threaten to tell his wife.  You don’t.  But you tell at least three of your girlfriends, and somehow it gets back to his wife. When she confronts you, you are so stunned at her anger that you deny it happened.