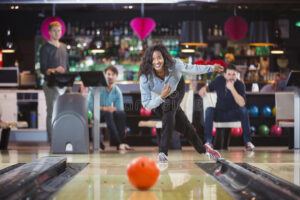 Carlina: “I was romantically bored and between relationships when I accepted my new boss’ invitation to attend a bowling party for his team.  I had never bowled and was never interested, but that night I fell in love with the game and my new boss.”

Sharla: “I was on a blind date with a guy who didn’t really appeal to me until he took the lead in the restaurant and gave the waiter my order for dinner. Suddenly, he was the sexiest man alive and my interest in him soared. A man’s sex appeal is greatly enhanced by his ability to take charge wherever he’s at.”

Maria: “During the course of the evening on our first date, my date left the table twice in the restaurant to take a “business call,” but I could hear a woman screaming on the phone. When he left for the third time, I got up to leave.  He apologized and explained that he was being stalked by an ex-fiancee.  He promised not to take another call from her. I decided to stay but came to regret my decision after she accosted us later leaving the restaurant screaming and threatening to sue him for breach of promise.”

Jeff: “When we met, initially, I liked her because of the way she received my candid declaration that I wasn’t monogamous. She said she didn’t mind sharing me with other women, but our paths split abruptly when she demanded I pay her $1200 car repair bill after we became intimate.”

Aja: “I was dating a guy who was brutally blunt, but his physical appearance and charm overshadowed his mouth. However, it became apparent that he was no longer interested in us being together when he stated that I was the first ‘fat woman’ he’d ever dated.  He said I needed to go on a diet if we were to be together. I blocked his calls immediately.”

Jay: “We were on a second date when I fell in love with her.  We were riding on the highway and passed an elderly man trying to fix his flat tire. When she spotted him, she demanded I stop the car to help him.  I had never changed a tire before, but I learned quickly from her, as she grabbed the tools, and proceeded to fix the tire. When she finished, the old man winked at me and said, “if she ain’t your wife, she oughta be!”