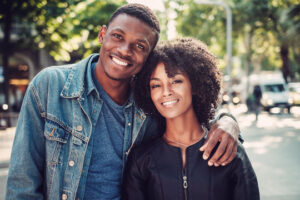 Do you have more drama than joy in your relationship?  Too few women understand that they have the power to change their own circumstances if they would intellectualize their involvement instead of romanticizing it.  If you know you’re where you shouldn’t be…get out now!  Don’t hang on like this is the only guy in the world.  You won’t know if the grass is greener until you take a look over the fence and you’ve got to get out of your misery patch to look.  The following are examples.

Cindy dates a lawyer once a week who demands respect.  She cannot talk on her own phone for more than 10 seconds if he’s present.  She cannot look at another man if she’s in his company.  But he whispers to “business associates” on his phone for twenty minutes or more, while Cindy sulks in silence.  He compliments every woman in the room but Cindy and refers to her glaring looks as insecurity.  She’s miserable, but she hangs on because she sees him as a “big shot” and the envy of all women who don’t know him as he is.  She enjoys the status of being his woman.

Ann sees her boyfriend George on Tuesdays only.  He claims the weekend for himself and his “personal time.”  However, he can never be reached at home.  Ann is distressed by his elusiveness.  She thinks he’s afraid to become serious.  In her heart, she knows that he’s seeing someone else, but she can’t prove it.  And right now, there’s no one else for her to focus on romantically, so she settles for George.  George takes serious advantage of her apparent lack of self-confidence.

Yvonne’s boyfriend Hank lives with another woman and has keys to Yvonne’s apartment.  Yvonne wants to get married, but he claims that the woman he lives with is mentally unstable and not ready to withstand the shock of his departure.  Yvonne’s better judgment is being held hostage by his charm and her fear of being alone.  She takes a lot of sleeping pills.

Maleah had caught Fred on several occasions out with other women.  Molly and Fred have been together for five years.  Molly attributes her forgiving ways and fortitude…to “cooperating with love and accepting the fact that your mate is not perfect.”  Last month, Fred disappeared for two weeks without a word and Molly later discovered him in the arms of another woman.  She finally gave up when he confessed his love for someone else.  Molly’s problem was that she kept hoping for a change in Fred, and he did change, but not for the better.

Sandy waited three years to marry Carl.  Carl had a wife and two children.  Carl promised to marry her as soon as he got divorced.  Meanwhile, Sandy had two children for Carl while she waited.  She felt confident that the added responsibility would jar him loose from his “unhappy” home front.  In the fourth year, Car’s wife had another baby and sent Sandy a note.  The note read, “I’m one up on you and our love is here to stay.”  Sandy had thought her existence was well hidden and became terrified.  She moved to another town with her two kids and left no forwarding address.