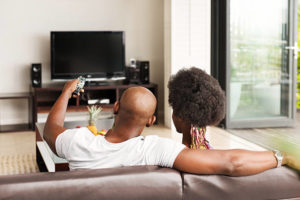 Danielle has been involved for over seven months with a man whom she sees twice a month.  He visits her.  She visits him.  But they never go out.  Their activities together are limited between the two residences.  He doesn’t like to go out and spend money on entertainment.  Danielle wants more, but she also wants to be in “love”.  She enjoys being able to say, “my boyfriend said this or my boyfriend said that,” around her friends.  She feels like having a man validates her as a woman.  So she pretends to be content, though she’s miserable.

Anna sees John once a week.  After work, he can never be reached directly by phone.  He is elusive, mysterious and basically unavailable.  Though distressed by his actions, Anna makes excuses for his behavior.  She tells others that he’s afraid to become serious because he had a bad divorce.  She believes she is one of many, but she pretends otherwise.  She hopes one day he’ll suddenly come to his senses and realize who’s the best one for him.  She spends a lot of time waiting on his call.  She feels that “a bird in the hand is better than looking in the bush.”

Cheryl continues to pursue a relationship with a guy whom she knows only sees her when he has nothing else better to do.  She’s unhappy, but to her, a little bit of his time is better than sitting home alone.

Yvonne’s boyfriend lives with another woman.  Yvonne rationalizes that if he didn’t like her, he wouldn’t spend time with her.  She feels that through dynamic sex and other “gifts,” he’ll be persuaded one day to leave his girlfriend for her, and they can live happily ever after.

Jan seems to gravitate toward domineering men.  She has been the victim of domestic violence with two different men.  Currently, she’s involved with a guy who embarrasses her often in public and treats her like crap.  She wishes for something better, but she doesn’t have the guts to leave him.  She fears being alone, and she’ll accept any kind of treatment to avoid it.

Note:  What about you?  Sit and reflect a moment.  Picture your current relationship.  Is it 70% of what you’d want it to be?  No relationship is 100%, but it is reasonable for one to expect 2/3 of what is desired to be present when the heart is given free rein over the head.  Are you happy or complacent?  Is he meeting those needs that are necessary to your spiritual well being?  Can you talk?  Does he listen?  Does he really care?

Take some time and analyze your situation.  Is your current relationship good for you or do you feel burdened most of the time?  You want it…yet you’re not sure.  Sometimes we stay with the old because we are afraid to experiment with the new.  You can’t tell if the grass is greener if you never take a look over the fence.  Studies show that too many women are ensconced in relationships where frustration and disappointment lay as a foundation.