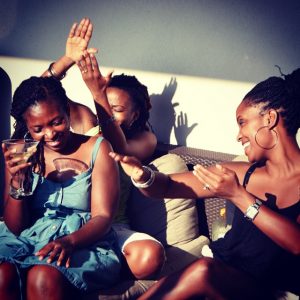 Caryl:  “In three months I will marry, and I will limit the number of girlfriends who will be able to visit me at home. You have to watch women around your man.  A dude can come between the best of friends.”

Meeka:  “Give me a Southern man any day.  They are raised up from little boys to honor and respect women.  Even when the worst scoundrels do you in, it’s in a gentlemanly fashion.”

Lana:  “I’ve discovered that when I go out and determine to have a good time, I always do and when I convince myself that the evening’s bound to be boring, it always is.”

Marla: “Since I stopped sleeping with every ‘romance hopeful’ my phone rings far more than it ever did when I was sexually active and scrounging for affection.”

Anthony: “I know a number of women with beautiful hair, skin, eyes and bodies.  But their heads are on so crooked that their beauty disappears in a matter of minutes.”

Tanya:  “I used to suffer from loneliness until I got a boyfriend.  Now I suffer from anxiety and insecurity, as I worry daily about who else he’s with and what he’s doing.  I don’t know which one is worse.  I don’t trust men in general.  But I’m not ready to be without one. “

Donna: “I was a single woman in an abusive relationship with a long-time boyfriend who used to slap me hard across the face every time I disagreed with him.  I would cry silently and never say a word.  I was scared to stop seeing him because I thought he’d kill me.  Then one day I finally made up my mind to move away and when I told him he shocked me by wishing me well.  I never saw him again, but I realized that my fear had kept me in a prison he didn’t have me in.”

Barb:  “Some of us get tired of what appears to be a fruitless search for a mate and opt for the church to replace the longing.  Some of us will hang for a while with “imitations” of what we’re looking for and work off our disappointments at work.  Among my friends, floods of tears are common.  Many are discouraged and lower their reqs for a man and end up paying the price.  Shortcomings are too often accepted through fantasizing or hope that one day things will change.”

Ena: “I cannot share my joys in a relationship with friends who are not romantically involved.  They either offer bad advice, change the subject, or stop calling for a while.

Paula: “The next time I meet a guy and he tells me he likes me but he’s “seeing someone,” I will understand what that means.  I’m no longer interested in trying to outdo, out-sex, and out-think another woman to land the No. 1 spot.”

Carolyn: “This year, I dated enough guys in a lower income bracket to know that ballet and baseball don’t mix.  From now on, I’ll wait for my dream type, or I’ll walk alone to the opera.”

Katie: “I had to stop visiting my girlfriend’s home because her husband and I were beginning to look at each other in a way that made me feel guilty.”

Renee: “I had a one night stand with a very attractive guy whom I met at an out of town workshop.  He was the perfect charmer, and I was lonely, starving for attention and very vulnerable.  I was ashamed the next morning, and nervous about facing him. But my humiliation turned to anger, when he walked past me twice, looked in my eyes and ignored me.  It took me a long time to forgive myself.”