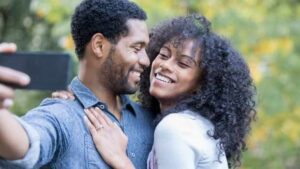 Q.  I am scheduled to marry my girlfriend in 30 days, but I’m seriously contemplating canceling the wedding because she recently confessed that she dated my brother a year before she met me. My brother has never mentioned it, and I understand why.  We have always had an unspoken rule about dating the same woman.  The thought of going behind my brother is troublesome.  I find it difficult now to even see her in the same light because my brother and I both have had her.  What do you say?

A.  I think you should postpone the wedding until you’ve had a chance to really ponder your position. No one can help you with this decision but you.  However, I think the past should be left in the past.

Q.  My best friend and I met the same guy at the same party, and we were both attracted to him. All of us exchanged business cards, but because my friend and I have an honest relationship, we discussed our mutual attraction.  Now, we are trying to come up with a fair way to determine which one of us should pursue the attraction.  Any suggestions?

A.  Yes! I suggest y’all let him do the “determining.”  Meanwhile, the two of you need to go somewhere and cool out and see which one he pursues.

Q.  What does it mean when a guy tells a woman after four dates and two consecutive nights of heady sex, that he’s just looking for a friend with no strings attached?

A.  It means just what he said. He wants “friendly sex without the bond of commitment.  He doesn’t want to be chained to a relationship, which automatically comes with some expectations.