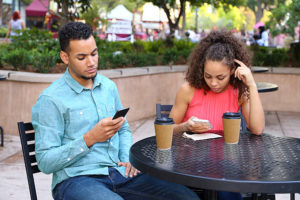 Q.  I recently went on a first date with a man, who was extremely attractive, but he had the manners of a buffalo.  He blew his nose at the table, was rude to the wait staff, stayed on the phone the entire time, and spit on the sidewalk.  Later, when we went to the theater, he smacked loudly on gum throughout the movie, and then stuck it under the seat.  Since that time, I have refused all his calls, but he won’t take the hint.  My friends think that since I don’t want to talk to him, I should send him an email and tell him why I don’t want to see him again.  I think ignoring him is easier.  What do you say?

A.  I say, tell him that you view him as a nice guy, you came to realize that the two of you didn’t have any real chemistry and should move on.  There’s no point in mentioning his behavior.  What good would it do?  You could create an enemy, and since you’re no longer interested, let someone else train him

Q.  Two years ago, my fiancé and I bought a house together, and he promised we’d be married in six months.  Last month, he informed me that he was marrying someone else, and he gave me two weeks to move out.  I refused, and he threatened to move her in after the wedding.  My family is advising me to just move out, get an attorney and sue him.  What would you do?

A.  I would change the order.  I would stay put and get an attorney to make the necessary legal maneuvers to force the sale of the house.  I would change the locks immediately if not sooner and pack up his clothes to be given to him under the watchful eyes of the police.  I would also make a vow to never again buy a house with someone whose last name wasn’t the same as mine.