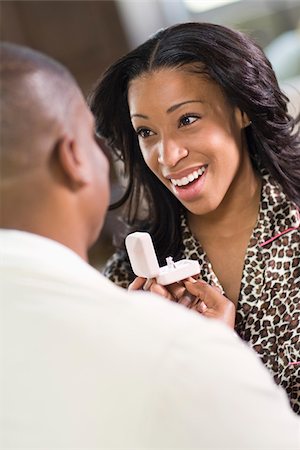 Q.  I was excited when my fiance` proposed until he gave me a ring that he purchased for a former fiancée. When they broke up, she gave him his ring back and now he feels I’m being petty because I don’t want it.  What do you say?  I don’t want a ring that was purchased with someone else in mind.  He says a ring is a ring since he bought it. What do you think?

A.  I say he should trade that one in and get one with you in mind, and I don’t blame you.  I wouldn’t accept less than that.

Q.  The only man I’ve ever loved dumped me and married another woman two months later. Two weeks after his wedding, he called and said he had made a horrible mistake and that he wanted me back.  He decided to move out after I told him he could stay with me, but I’ve since changed my mind.  I don’t want to get involved with him again, and I’ve been avoiding his calls.  Can you tell me a good way to tell him that he can’t come here and that I’m no longer interested in resuming our relationship?  I don’t want to put myself in the position for him to hurt me again.

A.  Be frank and honest.  Tell him you changed your mind and why…then suggest a good hotel for him.