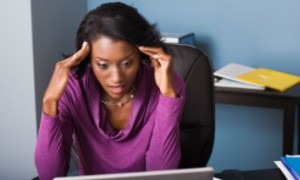 Q.  I recently found out by playing around on the Internet that my boyfriend is an ex-felon who’s done time for aggravated battery and domestic violence.  He’s always had a bad temper, and now that I know about his background, I’m ready to move on.  But I’m suddenly afraid of him and I don’t know how to tell him.  What would you do?

A.  I would not mention what I found out.  I would come up with something creative, and I would say it with a look of courage on my face, in spite of my stomach-churning.  I would do whatever I had to do to achieve peace of mind.  You cannot allow yourself to be controlled by your fear.

Q.  I recently accepted an engagement ring from my boyfriend of three years, but I’m in love with his best friend. The best friend and I “slipped up” once.  But since then, he won’t even look at me.  I’m confused about my feelings though I know there’s no chance to be with his friend. I want to be married, and I’m afraid to blow this opportunity to be with a good man who is financially successful.  But I don’t love him, and all my friends are advising me to marry now and fall in love later.  What do you say?

A.  I say gather up some integrity and do the right thing.  Let that fiancé of yours off the hook of deceit and return his engagement ring immediately.  With marriage, it’s usually the other way around.  You fall in love and then get married unless you live in a culture where arranged marriages are the norm.