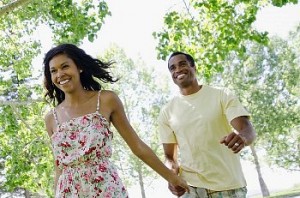 Q.  I’ve been dating a guy for five months, who has never tried to kiss me, or attempt to spend the night. However, he always invites me to go to the movies, and various other events, where a companion is appropriate.  I really like him, but I don’t think he’s interested in me romantically.  But I’ve reached the point where I must confront him about his feelings for me.  How do you think I should approach him without sounding too forward?  All my friends have advised me to cool out and just continue enjoying the time we spend together..

A.  I think you’re right. It sounds like you’re being used more as an escort.  However, after five months of dating, any questions about his interest in you romantically would be very appropriate.  If I were you, I would ask him to define the relationship in his mind.  If he says, you’re just friends.  Then, you have your answer and you can act accordingly.

Q.  At a friend’s college graduation, I spotted my boyfriend in the audience with another woman. When I approached him, he hugged me in a platonic way, spoke to me warmly like I was an old acquaintance and disappeared into the crowd.  I have not been able to reach him since.  I’ve left several messages and he has not returned my calls.  I think he got busted and can’t face me.  What do you think?

A.  I think you’re right. Hopefully, you won’t call him anymore, and you’ll change his title to ex-boyfriend.