Story Of The Week – A Case Of Fascination 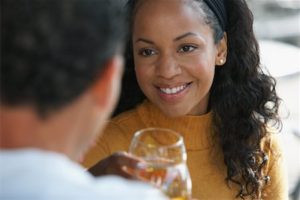 A Case Of Fascination

I was a free-lance reporter for a local newspaper when I was asked to do a story on high-rise fire rescues.  I called the fire department and was referred to a lieutenant who was considered an expert on the subject.

When he answered the phone, I melted at the sound of his voice. It was by far the best representation of masculinity I’d ever heard.  It was mellow and confident, and his manner almost dissolved my agenda.  In minutes, I went from a serious, qualified journalist to a budding high school reporter who couldn’t concentrate on her own questions.

I knew I had lost myself when I suggested we continue the interview over lunch the following week.  I had already asked all of my intended questions, but I was prepared to make up some more just for the opportunity to meet this guy with a fascinating voice.  To my surprise, he seemed equally enchanted and readily accepted my invitation.

On the day we met, I had to dig my car out of twelve inches of snow in order to get to the restaurant.  By the time I arrived, my appearance was disheveled, and I felt like I was not at my best.  When I sat down across from him and looked into his face, I felt like hiding under the table.

His look far exceeded my expectations.  He was not only gorgeous, but he had big brown eyes that stared at me with familiarity as if he knew all about me instantly. Though his eyes radiated warmth and amusement during our talk, his conversation remained official and focused.  When I tried to get personal with general questions like, “are you single,” he would answer the question ambiguously with a slight smile.  “Sometimes.”

Therefore, after we conversed for an hour, with my ego tucked in my sleeve, I came to the conclusion that the “smitten bell” was only ringing on one side of the table, and it wasn’t his.  So I called the meeting to an abrupt end and reached for my coat. I saw no point in continuing the charade of an interview when all I wanted was to get to know the guy.  I quickly assumed that he was either married or taken.  As a courtesy, I passed him my card in case he had any questions, thanked him for coming, and hurried out the door, without looking back.

When I got home, I looked in the mirror and saw all the reasons why the interest wasn’t mutual.  The cold and the snow had almost dissolved my makeup, my hairstyle had drooped, and two of my fingernails had broken while I was digging my car out of the snow.

When the phone rang as I was entering my apartment, disappointment reigned in my voice when I answered.  “The fascination wasn’t mutual,” I said, expecting it to be my friend Charise.  I had told her about the lunch, and she had been excited as I was about the possibilities of a connection.

But it wasn’t her … it was him.  “How do you know it wasn’t?” he asked with a deep chuckle in his voice.  I was so shocked I couldn’t speak.  Before I could answer, he said, “I was wondering.  Now that your interview is over, could we possibly meet again, so that I may interview you on an upcoming article I’m doing on beautiful, brainy women?”

In a barely audible voice, I whispered, “Sure”… and the rest is history.  That was a year ago and we’ve been together ever since.  I was hoping to get a ring for Christmas, but I received it on Valentine’s Day instead.  We plan to marry in October.