Story Of The Week – An Unplanned Reunion 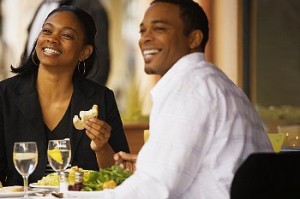 When he walked in the door, I chuckled softly to myself at the sight of him and gritted my teeth.  His face was one I could never forget.  It was a handsome face with thick black eyebrows, high cheekbones, and gorgeous eyes.  It was also a face I had hoped to never see again.

I had first seen it five years before at a friend’s birthday party, and I noticed him when he walked in the door.  I was immediately attracted to him. He had an air of distinction, which separated him from every other guy in the room.

However, the attraction did not turn out to be mutual.  I learned this after I mentioned to a mutual friend that he was someone I’d like to know.  Ten minutes later, I accidentally overheard the conversation between them, as I stood undetected on the other side of a door.

He told my friend bluntly that he didn’t like big women.  (I weighed almost 300 pounds at the time)  When my friend pointed out that I had a beautiful face and a beautiful spirit, he stated emphatically that he found it difficult to even notice the face of a woman who was obese.  I cried myself to sleep that night and I never told anyone what I’d overheard.

Now here we were, ironically five years later, being introduced formally by two mutual friends on a blind date they had set up.  However, though I recognized him, he didn’t recognize me.  I was certain it was because I was now half the size of my former self.

When he walked in and sat down next to me, he grinned broadly like a man who had just won a valuable prize.  He was intense with interest as he complimented me profusely on my hair, face, and body.

I became angry all over again at the sight of him, but I was cool.  He was still gorgeous, but I was not interested.  As I sat staring at him across the table, I kept trying to come up with a shocking way to remind him of who I was, but I couldn’t.

I wanted him to know of the pain he had unknowingly inflicted upon my heart on that snowy night five years before, but my tongue was tied.

Suddenly, it dawned on me that he had hurt me unknowingly.  He had no way of knowing I heard what he said.  As I sat there watching him looking at me admiringly, I realized his words had succeeded in changing my life for the better.  I had joined the health club a week after the birthday party and had since lost over 160 pounds.

As my disdain began to dwindle, I forgave him there on the spot.  When he asked me to dance, I smiled at him for the first time that evening, and he responded by telling me I was beautiful.  The evening ended up being the beginning of an exciting courtship.  I married him eleven months later, and to this day, I’ve never mentioned to him what I overheard him say at that party long ago.