Story Of The Week – The Difference In A Day 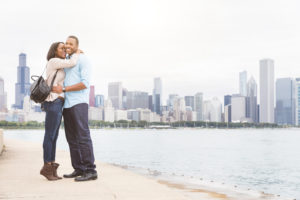 The Difference In A Day

I will never forget the sound of his voice.  It had the kind of deep quality that only comes from a gorgeous face, and I heard it on a day when I needed a spark in my life.  I had just gotten fired from my job and was on the phone complaining about my car and the bad repair service I’d gotten.  I became exasperated when I was abruptly told to hold for the manager.  However, when the manager came on the line, and I heard his voice, I turned off my whine.  My spirit accelerated from down to up in a matter of seconds

When we finished talking, he sounded just as eager to meet me, as I was to meet him.  He jokingly stated that if my problem wasn’t fixed, he’d buy me dinner.   Later, as I rushed to the repair shop, I was excited.  There was something about his voice that gave me the shivers, and when I walked into the place and saw his face, I understood why.

He was just as I imagined.  Fine!  He had the body of a weightlifter and a smile that would dazzle in the dark.  However, when I approached him and inquired about my car, he responded in a manner that was void of the early friendliness, as he showed me all of the repairs that had been made.  Of course, my spirit flopped down again.

Disappointed that his personality on the phone had no follow-up, I paid my bill, got into my car, and started the motor.  To my surprise, he leaned in the window with a big smile and asked if I still planned to take him to dinner.  We both laughed at his joke, and then the expression on his face changed as he explained that he couldn’t leave for another hour, but that he would like to take me to dinner if I didn’t have any other plans.  I told him I didn’t and he invited me to stay and wait until he got off.

For the first time in my life, I did something spontaneous.  I stepped out of my car as if it was the natural thing to do, and sat down on a dusty bench and ate potato chips out of a nearby vending machine until it was time for him to leave.

As we drove to a quaint bar on the Upper East Side, we talked the night away as jazz played softly in the background.  I felt as if I had finally made a connection with a kindred spirit.  It turned out he was the owner of the shop, newly divorced, and relationship shy!  When the bar closed, we walked along the nearby riverwalk until dawn. That was seven months ago, and now we’re planning a December wedding.