Story Of The Week – A Gross Misconception 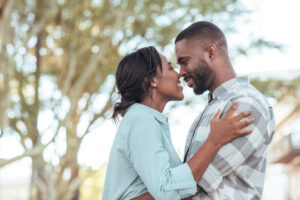 This was our second date, and I was surprised that this fine hunk of a man had asked me out again, because of his actions on our first date. We had been introduced by a mutual friend at a lawn party, and he had invited me out to a basketball game later that same night.

Now that I look back on it I wasn’t sure if he was asking me out because he thought I was attractive or he was just attempting to do what he felt was an obligatory follow-up to the introduction.

While at the game, he barely talked to me, and when I asked questions he grunted his answers as if he didn’t wish to be disturbed.  This left me perplexed because I couldn’t understand why I was there.  He appeared totally preoccupied with the game, and the only time he really acknowledged my presence was when a popcorn vendor passed by and he asked if I wanted some.

On the way home, he played the music in the car at a volume too loud for conversation, and when we got to my door, he thanked me for a lovely evening and said he’d call me.

When I got in my apartment, I called my two closest friends to tell them how my romantic hopes had been dashed, because it was apparent that my date was not nearly as interested in me as I was in him.  When I went to bed that night, I closed the chapter on him and rocked my bruised ego to sleep.

Therefore, I was shocked when he called three days later and asked me out for dinner and a movie.  I agreed to go because I was intrigued, though subconsciously I felt I was putting myself in harm’s way.

This time when he picked me up, I took a daring break from my usual shyness and looked him dead in the eye.  When I did, I saw that he was shy too, and I relaxed.

On the way to the restaurant, he offered short spurts of chit-chat that continued throughout dinner, but on his second glass of wine, he asked me if I knew that I was beautiful, and I almost dropped my fork.  I had never heard that word used in association with me and I was so flabbergasted, I couldn’t respond.  But I didn’t have to.

As I stared silently into his eyes, he sat across the table and told me how nervous he’d been on our first date, and how he had not been able to stop thinking about me since that night.  He told me how he loved my voice and the way I gestured with my hands, and how he felt a connection with me that was inexplicable.

By the time, dessert came, we were both so engrossed with each other that we were no longer interested in chocolate mousse cake.  He laughed when I told him how I was convinced that I wasn’t his type.  We ended up not going to the theater and closing the restaurant, but I learned a valuable lesson that night.  You can never know for sure where another person’s head is as it relates to how they view you…because you may be wrong.