The Flirt Files – Women On “The Chase” 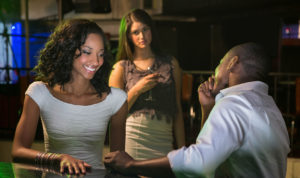 Women On “The Chase”

Cherrie – “I recently asked a guy at work to go with me to a friend’s party.  I liked him, but he didn’t seem to notice me.  I’ll never do it again because I was uncomfortable all evening.  He knew I liked him but pretended that he thought he was being invited under the banner of co-worker friendship.  All evening, he avoided my eyes and my getting acquainted questions. Before we left the party, he took another girl’s number right in front of me.  I’ll never do that again.”

Amy – “It was I who asked my husband out on our first date.  I had to gather up the nerve because he was the finest guy in school and women were throwing moves at him from every corner.  So, I came up with a creative idea to get his attention. I knew I couldn’t be just another pretty face. I bought some play money and put a $100.00 bill in a note that read, ‘If you’ll help me win a bet and be my escort at the Homecoming dance, I’ll split it with you.’  He loved it and agreed to go. At the end of the night, I gave him a $5 bill as his half of the “bet,” and won his heart.  Of course, the rest is history. “

Clarice – “I asked a co-worker out once who seemed genuinely flattered, but he turned me down, saying he had a girlfriend who would not approve of him being out with another woman.  I was so embarrassed that I backed down a whole flight of stairs and fell.  That was my first and last time asking a guy out.”

Sandy – “I ask guys out all the time and I have never been disappointed if the answer isn’t favorable.  My ego is in check before I approach them.  I asked one guy out for drinks, and he told me bluntly that he preferred to do the asking.  I have found that some men are very intimidated by attractive women.  They often feel that we have so many guys after us, that they fear rejection.  I find that my approach makes it easier for us to get together.  However, once I initiate the date, I let him initiate any further contact.”

Meryl – “I will ask a guy out, but only when I think he’s somewhat interested.  If he’s a little slow on making a move, I’ll take the first step.  But as a rule, I think a woman with a strong ego and a wealth of confidence is the only one equipped enough to ask a guy out because rejection is hard to take.  I invited a very handsome guy once to a party I was throwing, after making it plain that I was interested in him.  However, he showed up and ended up talking to every woman there but me.”

Cora – “I proposed to my boyfriend after five years and he immediately said yes.  I got tired of waiting on him, and because I never mentioned marriage, I learned that he thought I wasn’t interested.”

Stephanie – “I asked my boyfriend to marry me on our tenth date, and he hesitated too long before he answered.  So, I withdrew the question.  His answer was eventually yes, but I was offended that he took so long to respond.  The next day, he called and proposed to me.  I accepted, and we flew to Vegas that weekend.

Pam – “I had been hoping and waiting for my boyfriend of three years to propose, but he wouldn’t. So, I decided to propose to him over Thanksgiving dinner at my parents’ home.  I figured he wouldn’t say no, since we were in the presence of my family. But he became embarrassed, nodded a no with his head, and walked out the door.  An hour later, he came back, apologized to my family, and asked me if he could change his mind.  I told him no.  We broke up that same day.”