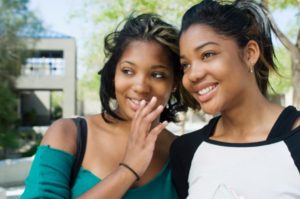 Kate was often in the company of Michael, because of their shared relationship with her best friend Dee.  Kate, who was not dating, lived vicariously through Dee’s encounters and Dee was never without a man. She could be heartbroken on Thursday, sworn to a life of seclusion by Saturday, and giggling on a new date by Monday.  She bounced through relationships, mixing the bitter with the sweet, without ever seeming to land.  But this time, it was different…for Michael was different.  And no one knew this better than Kate, for she had become obsessed with possessing him, even though he was loved by Dee.

Dee trusted Kate as her confidante and between them, there were no secrets…until now.  When Dee first met Michael, she reached into the unknown pockets of her heart to embrace him. There were no restraints, for he brought to life the handsome images on the magazine pages. Meanwhile, Kate grasped Dee’s joy while Dee thrived on Kate’s strength. Their bond had been cemented in need…until now.

Time passed as a part of Kate stood watching with an eye of envy, as Dee fell hopelessly in love, while the rest of her sat quietly amidst the excitement and pretended to approve.

However, the foundation of their friendship slowly crumbled as Kate began to plot to get Michael’s attention. Dee, meanwhile, oblivious to Kate’s sudden disinterest, continued to chat uninhibitedly about the ups and downs of the relationship.  As Kate absorbed every word in silence, guilt began to choke the words in her mouth. Desire, however, triumphed over guilt and scruples took a holiday as Kate worked hard to develop a strategy of entrapment.  She had caught Michael on two separate occasions stealing looks at her and rationalized that he was secretly taken with her as well.

She waited patiently for the right moment to test her appeal. But it never came, for suddenly without warning, Michael was gone and Dee was down for the count. His departure was devastating to Dee, and Kate’s desire for Michael disintegrated as compassion compelled her to reach out to console her friend. She grieved quietly over her mental infidelity.

Kate was ashamed and repentant as she dialed Michael’s number to speak on behalf of Dee. She was no longer driven by envy or need.  She was motivated by friendship and the pain in her friend’s eyes.  Michael listened silently to Kate’s plea to call Dee.  He squirmed uncomfortably as he struggled to speak.  “Kate, I appreciate your call and your devotion to Dee, but I don’t think it’s fair to continue to see Dee. I’m sure Dee will be alright, she’s strong.  You’re a good friend, Kate.  Dee’s lucky to have you.  Goodbye.”

Kate hung up and sat crying softly for herself and her friend.  “My, what a fool I’ve been,” she sobbed, as she wiped her tears.

As Michael replaced the receiver, his hand trembled as he whispered aloud to himself.  “Goodbye Kate, my love, Goodbye…..”