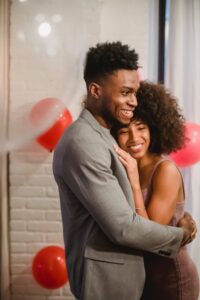 Kelly had been planning for this evening for the last two months. Her dress had been specially designed for the occasion and between the hairdresser and the mirror, she had spent seven hours preparing for this big night.   She had hoped that by the time the party rolled around, she would have a date to escort her, but she didn’t.

She looked around in the car at her friends Nancy and Judy who too, were going dateless to the biggest party of the year. She hated going out with women because she didn’t like to compete with anyone for male attention.  But this time, she had made an exception, because she felt she was the best-looking one in the group. She had chosen the least attractive of her friends to accompany her, so she could be comfortable throughout the evening.

She felt sorry for Nancy as they got out of the car because she knew that out of the two of them, Nancy would probably not dance all evening. Men didn’t usually gravitate to her.

When they walked through the entrance to the ballroom, a tall guy with a nice mustache stood talking to a shorter guy with no mustache. She smiled at the taller one. She loved men with mustaches. The shorter guy spoke to her and smiled approvingly.  She didn’t speak, because she didn’t wish to get a conversation started with someone who wasn’t her type. She knew the word “hello” could be a preamble to a fruitless get-acquainted exercise.

The taller one spoke to Nancy and asked her to dance. Nancy accepted with a smile and asked Kelly if she’d take her purse to the table. Kelly was miffed but smiled sweetly as they walked away.  As she searched for their table, she silently berated Nancy for behaving like an over-anxious teenager. She could have at least waited until they were seated to dance with someone.

As she and Judy walked through the ballroom, she saw several guys who appeared to be alone. One asked her to dance, but she nodded no and kept walking. He wasn’t her type either and she was on a mission to find Mr. Right on this night.

After arriving at her table, she sat straight in her chair to project dignity and poise and waited for someone who was more in her league to approach the table.  But as the night wore on, no one came. To her dismay, neither she nor Judy danced that evening, but Nancy remained on the floor all night with the tall guy with the mustache.