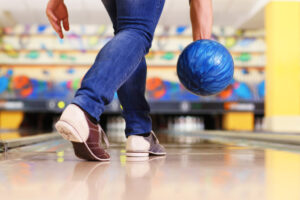 Pam knew the odds were against her.  But she had made up her mind to go through with her idea anyway.  She knew women her size was not in demand, but she also knew she could compete with any woman in the brains and personality departments.  She had been bowling next to this guy for the last four months and he had never looked her way.  From what little information she could gather, he was single, employed, and available.  She was so attracted to him that she had begun to dream about him and look forward to bowling night with more zeal than ever.

She decided on this night to put her plan into play.  She would put on her prettiest face and when her stomach ceased to churn, she would approach him on the sidelines and give him the speech she had rehearsed for the last three weeks. She would introduce herself, offer him her phone number, a big smile, and a speech inviting him to call if he would like to get to know a person who could keep him laughing.  She knew she had a lot going for her.  But she also knew that her free spirit and great sense of humor were usually camouflaged by what others viewed as a weight problem.

As she sat there on the bench trying, as usual, not to be caught staring at him, she saw him walking in her direction.  As she looked into his face, she saw that he was looking at her.  Her stomach flipped over, as he drew close to where she was sitting.  Suddenly, she changed her mind.  “This no longer seems like a good idea.  I won’t waste my time,” she muttered to herself, as she crumbled the piece of paper in her hand.  “He’d probably laugh in my face anyway.”

Suddenly, he stopped in front of her and sat down on the bench beside her.  “Hi…my name is Len, what’s yours?”  Her heart dropped in her chest as she looked to see if he was speaking to her.  “Pam,” she said, as she blinked nervously.  “Well, Pam,” he said, with a slight smile, “I’ve been watching you for a while and I like the way you bowl and the way you carry yourself…I’d like to get to know you better….Are you married?  If not, would you marry me?”  Pam laughed, as she squeezed the crumpled piece of paper in her hand.  She couldn’t believe her ears.