The Dating Chronicles – The Perfect Exit 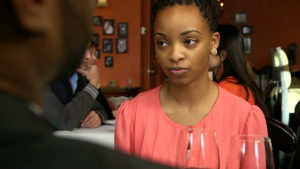 Sandy was trying not to look bored, but she was about to go to sleep over candlelight. She had been listening to her date expound about his achievements, his importance in the community, and his many admirers. She shook her head in disbelief when he asked the waiter if he had ever heard of him.  This was their first date and Sandy’s fourth blind date in a row.  She had been a social recluse since a bad breakup eight months before but decided to try the dating scene again with the insistence of friends.

As she sat there, bored out of her mind, she felt slight despair as she recalled her last three blind dates.  The first one liked her, but she didn’t like him.  She liked the second one, but he didn’t like her.  The third one turned out to be a former schoolmate’s ex-husband, whose history she was all too familiar with.  However, this one had turned out to be the worst of the four.

As she sat contemplating a polite and easy way to end the evening, his cell phone rang and when he answered it, he made it apparent that he was talking to a woman.  Though he was very handsome, he had already dismissed himself as someone with potential when he told her (after the meal was served) that it was customary for him to split the check on a blind date, since they were meeting for the first time.

As he talked on the phone, she excused herself from the table and signaled that she was going to the ladies’ room.  She walked out of the door of the restaurant instead.

Nia DaCosta (November 8, 1989) is a screenwriter and director. She is known for her breakout film Little Woods (2019) and for co-writing Candyman (2020). In August 2020, it was announced that she would be the first black woman to direct a Marvel Film when she directs the upcoming sequel to Captain Marvel (2019), scheduled to be released in 2022.
The Dating Chronicles

“Ironically, my fiancée, who has always operated outside the box, proposed to me on the same night I planned to propose to her. We ended up exchanging rings. The difference was that I gave her a diamond ring and she gave me a wooden African band.”