The Dating Chronicles – The Date 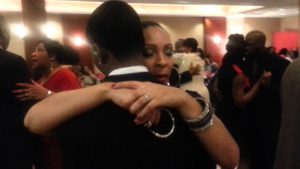 The lighting was dim, but Tess could tell from his profile that he was not her type. Though he was standing, he appeared slouched and his glasses were thick.  However,  she wasn’t disappointed, because she knew before coming that her friend Maggie’s taste in men had not improved. But, she hoped for the best and decided to give her another try.

The party, as usual, was crowded and though this was one of Maggie’s usual attempts at setting up a blind date, Tess had already begun to size up the other men in the room.  She frowned slightly as Maggie maneuvered her over for introductions.  His name was Bob.

“Bob, this is my friend Tess, I told you about.” She could see him better now and he was definitely not what she was looking for. He had no mustache, and for her, this was one cosmetic symbol that separated the men from the boys.

Though she felt like running, she managed a polite smile. “Hi” she mumbled, as she reached for his hand, which was still in his pocket. His grip was firm, but his hand was too soft. He probably hasn’t been outdoors since high school, she thought to herself.

“Have you known Maggie long?”…he asked in an effort to begin. “Yes, we grew up together,” she replied, as she winked at a passing male acquaintance.

For her, the loud music was a perfect backdrop so she wouldn’t have to talk. She decided to let him carry the conversation. There was nothing she wanted to know. Silence reigned for a while and she could feel his nervousness.  Suddenly, she spotted an ex-boyfriend across the room, who once had the “power.” Her mind quickly computed and came up with a  plan for escape. But, when she opened her mouth to excuse herself, Bob spoke.

“Would you like to dance?” That’s the least I can do, she thought to herself. This won’t take long and I’ll be on my way. “Sure, why not,” she shrugged, as they moved out to the dance floor.

She hadn’t noticed the music was soft and one of her favorite songs. At first, she was tense because she was anxious to flirt with the “old love” she had just spotted. But, then she got a whiff of his cologne and it was powerful. His arms tightened around her and underneath his jacket, his body felt strong and conditioned. She looked up at him to see if it were the same guy and to her surprise; he had removed his glasses and a whistle almost pushed from her lips. He looked like a different person.

He had soft brown eyes with lights in them and teeth that sparkled. “You’re not what I expected,” he said, with a voice that had eluded her before. She stammered as she tried to tear her eyes away from his. Her interest was slowly rising.

“I’m not?” she asked, in what sounded to her like a timid voice. “No,” he chuckled. “I didn’t expect you to be pretty or shy. It’s a refreshing surprise for a blind date.” Are you spontaneous?”

“Sometimes,” Tess answered with a big grin.   Suddenly, she was intrigued by ‘Mr. No Mustache.’

“How ‘bout going sailing tonight?”.. he asked with an impish grin. “I’ve got a boat.” This is getting better and better, she said to herself as she rested her head lightly on what now felt like a massive chest. “I’d love to,” she replied as she closed her eyes and inhaled his cologne. Suddenly, the music was a perfect backdrop to what looked like the beginning of an interesting evening.