The Dating Chronicles – The Set-Up 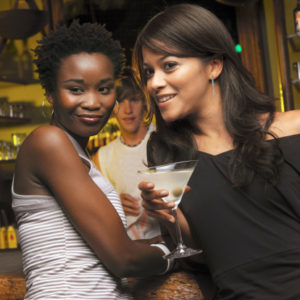 When Jack walked in the door of the sports bar, Beth and Kay both spotted him at the same time and mentioned how attractive he was.  Kay even winked at him when she caught his eye, but Jack was immediately drawn to Beth.  He liked her big brown eyes and kept complimenting her on how pretty she was.

Beth and Kay were best friends, and though Kay was instantly attracted to Jack, she didn’t feel rejected at not being chosen.

For two solid months, Beth and Jack saw each other regularly, and often double-dated with Kay and whoever she was dating at the moment.  Then Jack disappeared suddenly without a word, and Beth was puzzled and confused because he wouldn’t answer her calls or texts.  He simply stopped calling, and she didn’t know what to think.

Two weeks after he disappeared, Jack phoned Kay and expressed a desire to be with her instead of Beth.  He claimed that since he had gotten to know her, he’d decided she was more of his kind of woman.  Kay was shocked, but not interested, and decided to teach Jack a lesson.

She pretended to be flattered and agreed to meet him for lunch the next day. When she hung up, she called Beth and asked her to meet her at the same place for lunch. Kay had no intention of showing up.

She was thrilled when Beth called the next day and thanked Kay for setting up the meet, so she could confront Jack face to face.  She didn’t even inquire as to how it happened.  She was just pleased that she got the opportunity to let Jack know that she considered him a jerk for the way he behaved.  Jack never called Kay again.