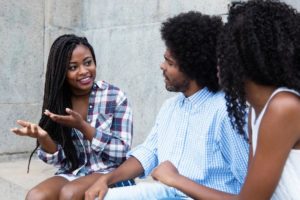 Sometimes a definite Mr. Wrong is easy to recognize right from the start-like the guy from New Jersey I dated.  It kind of ruined the whole state for me.  He took me to the last of the Indiana Jones movies on opening night, and the theater was packed.  As we sat waiting for the movie to begin, this really tall guy sat directly in front of me, blocking off most of the screen.  I asked my date-reasonably, I thought-if he would switch seats with me since he was taller.  To my astonishment, he said no.  If we switched, he added, then he wouldn’t be able to see.  Now, I was always under the impression that when a guy asks you out, he’s kind of hoping you’ll like him.  Not this guy.  He didn’t care-as long as he had a good view of Harrison Ford.

Ironically, because the theater was so crowded, the ushers directed everyone to move all the way over to the right of their row.  Divine justice swooped down, and the really tall guy ended up- directly in front of my date.          Other relationships aren’t so cut-and-dried.  Some guys will not only willingly change seats with you, but will also get up in the middle of the movie because they see you’re out of Coke.  And yet, they’re still not the right one.

I dated a guy who was really great at making up.  Just when I thought I never wanted to see him again, he’d show up at the airport with balloons and flowers and a sign that said “I’m sorry”.  It took my neighbor Jeff to point out that the words “I’m sorry” were on every bouquet this guy sent.  And he sent them a lot.  He had a bit of a temper and often said things he later regretted.  That got old pretty fast.  But it started off fun.

I did some really neat things with this guy, which always makes it hard to break up.  The more memories you build, the tougher it is to break that bond, and the more willing you are to overlook the warning signs.  Yeah, he’s got a temper, but he’s really sorry.  He was mean-yet look at how sweet he is now.  Your friends may see the problem, but you don’t.  And when your parents bring up their concerns, you find yourself defending the guy-because they don’t know him the way you do.  Or maybe, just maybe, everyone else isn’t blinded the way you are.  The signs keep popping up, but you choose to ignore them and focus on the good things and the fun.  And if he makes you laugh, he’s really going to be hard to give up.

History together is another binding influence.  When you need to talk, how much easier is it to talk to someone who already knows the situation instead of starting from scratch?  Your boyfriend knows all about the problems at the office, your family, your hopes, your dreams, and when you most need a hug.  I’ve fallen into the trap.  Most of us have.  It’s easy.  It’s comfortable.  And women have the uncanny ability to rationalize that, somehow, there’s a chance for a future with this guy.  After all, we’ve already invested so much time in him.

A friend of mine has been living in this trap.  She’s dating a guy she knows she can’t marry.  Why?  Well, for starters, he’s not a Christian.  The preliminary disqualifier.   The red flag of red flags.  She knew it when she started dating him, but she ignored it.   Don’t get caught in this trap.  If you’re a Christian, and the guy’s not a Christian, you have no business dating him.  It’s like getting mixed up with a married man.  I don’t care how wonderful he is; he’s off-limits.

I’ve also struggled with letting other people’s opinion sway me.  I’ve been talked out of dating people I wanted to date and into dating people I knew I shouldn’t., like a guy at one of my jobs.  It was fairly obvious to everyone that he liked me.  We were both involved in political campaigns, and he would finagle it so that he ended up working with me.  He asked me out again and again, but I told him that I don’t date people I work with, because if it doesn’t work, well, you still have to work with them.

Excerpted from the book…What’s A Girl To Do?…While Waiting for Mr. Right