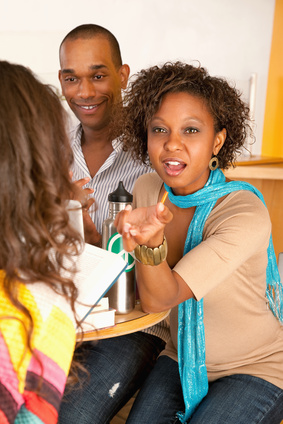 Q. A “friend w/benefits” whom I’ve been dating on an infrequent basis recently introduced me to her friend as her boyfriend and I cringed because we were immediately attracted to each other.  The chemistry was strong between us as we tried to play off the attraction.  I want to approach this woman, but I don’t want to hurt my friend’s feelings.  Though we’ve been intimate, we don’t have a serious relationship and she knows it.  Should I care more for her feelings than I do my own?  What would you do?

A.  Since a man has to live with himself first before he can be of any good to anyone, I would suggest you pass on this one. There is some information that seems to be missing.  It appears that you and your “girlfriend” do not share the same feelings about your relationship.  If you insist on pursuing this mentally, you should discontinue the relationship with your “friend” and allow an appropriate amount of time to pass before you approach the other woman.

Q.  Recently, I stopped by my girlfriend’s house unexpectedly and as I stood at the door, I overheard her telling a friend on the phone all about our relationship.  Some of the things she mentioned were very personal and private to me, and I resented her for it.  I broke up with her because I felt betrayed, but all my buddies say that I’ve overreacted to a common occurrence. Do women tell their girlfriends everything?  What do you say?