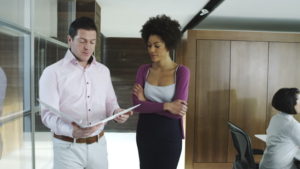 Q.  For the last two years, I’ve had a secret attraction to my boss.  Last month, on his birthday, after much urging from my best friend, I finally got up enough courage to tell him how I felt through a card.  However, he never responded to the gesture and has been avoiding me ever since.  He used to speak; now he mumbles.  It’s obvious that he’s not interested in me, and he feels awkward now that he knows how I feel.  I’m so embarrassed that I’m thinking about quitting.  What do you think?

A.  The embarrassment you feel is due to your pride.  It’s been bruised.  The best thing you can do is be grown up about this.  You stood at bat…you swung at the ball…but you missed.  Count it as an experience and chalk it up as a missed ball.  Don’t ever allow pride to influence your judgment.  Don’t quit your job without finding another one.  Since you understand his discomfort, you might want to send him a regret note and apologize for your “indiscretion.”  It’s called clearing the air.

Q.  My best friend is currently engaged to a guy whom everyone loves and admires.  I was among the many who thought she had landed the best catch in town until I heard last week that this guy has been seen out on several occasions with an ex-girlfriend to who he was formally engaged to.  I want to tell my friend, but I don’t want to hurt her.  However, I don’t want to see her walk into a marriage that could make her unhappy.  I feel guilty knowing about this and not telling her.  What would you do?

A.  I wouldn’t tell her unless I saw him myself.  If this guy’s affections are torn between her and another woman, there should be a clear indication that something isn’t right already occurring in the relationship.  Unfortunately, one of the hardest lessons to learn in life is that we have to allow our loved ones to cross their own valleys.  Just remember, what goes on in the dark eventually comes out in the light.