The Male Room: When The Dating Scene Turns Violent 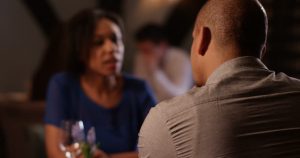 Violence on the dating scene is an especially sensitive area for me because I have been a recipient of such violence in the past. In my playa days, (I have since reformed) a girlfriend broke a beer bottle over my head when she unexpectedly discovered me at an outdoor party with another woman.  I ended up with fourteen stitches, and no apology.  I’m certain now that if the blood from the wound had not scared the hell out of me, and rendered me defenseless, I would have responded to her assault just as violently.

Needless to say, though that incident ended our relationship, I never pressed charges.  I think in retrospect, it was due to several factors; embarrassment, pride and guilt.

Recently, a buddy had a different reaction when a woman he’d been dating only four weeks, stabbed him in the shoulder when she walked up on him whispering to another woman on the phone.  He beat her black and blue, and then called 911.  Later, they ended up in court filing counter charges against each other, and he discovered she had a prior conviction from shooting an ex-boyfriend during a domestic altercation.

Statistics show that there has been a startling increase in the number of women who are the perpetrators of domestic violence in non-marital relationships.   Research shows in 2020, over 3,000 women across the U.S. appeared in court on domestic violence charges.  It’s a well-known fact that certain ideas of gender roles have led a lot of people to believe it would be virtually impossible for a woman to physically abuse a man.

However, it is not uncommon for abusive females to resort to weapons, or wait to catch their boyfriends unaware before they attack.  One college friend lost an eye, when he called off his wedding to a woman known for violent outbursts.  They were arguing in a parking lot, when he asked for his ring back.  She went in her trunk, pulled out a baseball bat and hit him in the eye when his back was turned.  She went to jail, but he was permanently injured.

A business associate’s girlfriend threw boiling hot water on him after he announced he was moving out of their apartment.   He suffered third degree burns, and I hear he is still seeking revenge a year later.

Studies show that it is not always easy to recognize domestic violence against men in non-marital encounters. Early in relationships, the woman may seem attentive, generous and protective in ways that later turn out to be controlling and frightening.  Sometimes, as it is with men, the abuse may appear as an isolated incident, followed by effusive apologies.

Statistics also reveal that nearly three out of ten men have experienced violence at the hands of an intimate partner during their lifetimes.  In addition, police reports across the country are showing a surge in cases involving single men being abused by jealous girlfriends, ex-wives, or women who felt rejected.

Several reports showed men being stalked by former wives or girlfriends, who used the legal system to harass them with domestic violence charges that were false.  They would take out restraining orders, follow the man and then call the police to file the complaint that the man had violated the order.  Studies also show that in the cases of men being abused, younger women are the most violent of all with upwards of 30% or more teenage and college-age women reporting that they initiated violence in their relationships, and more cases are being reported by men who claim to be victims of stalking.

If you or anyone you know is a victim of domestic violence or stalking, please call the Domestic Violence Hotline at (800) 942-6906, which offers help and counseling 24 hours a day.