The Dating Chronicles – No Accident 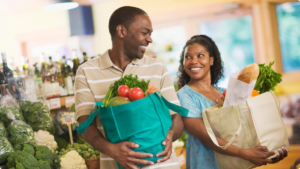 Gwen met Toby when he almost knocked her over in his usual mad rush to a meeting.  Gwen was walking to her car when Toby accidentally bumped into her on the street and knocked her bag of groceries out of her arms.

Gwen’s eyes were full of tears, as she bent down to pick up her groceries and Toby stopped to help her.  He thought she was crying because her groceries had spilled all over the street.  Two bottles of juice had broken, and a carton of eggs lay bare and busted at her feet.  While Toby apologized profusely, he reached in his pocket and gave her two twenty-dollar bills.  When her crying intensified, he became concerned and offered to help her to her car.

By this time, Gwen was bawling and clutching her bag of groceries for dear life.  Toby noticed she was not only distraught but very pretty.  Suddenly, he was no longer in a hurry, as he tried to comfort her.  He learned that she had lost her grandmother the day before and dropping her groceries simply exacerbated her grief.

After she eventually stopped crying, they ended up talking in the supermarket parking lot for over an hour.  They exchanged numbers and three days later Toby showed up unexpectedly at the church where her grandmother’s funeral was being held.  Gwen was surprised and delighted to see him.

Shortly after that, they began dating and eighteen months later they were married in the same church.  It was the third time for both.