How To Stop A Stalker 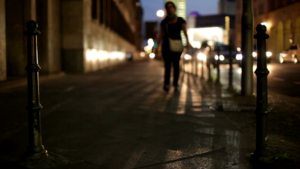 When I met *Carl, I was fully paranoid about relationships with guys who displayed intense personalities from the start due to past experience,   However, the first time I went out with him, I was so thrown off by how fine he was, and his long black eyelashes, that I became momentarily distracted from my usual scrutiny.

On the first date, he did three things that should have sent up a red flag, but I ignored each one because he spent most of the evening telling me how beautiful I was.

When a male friend passed by and waved at me, he asked if he was an old boyfriend.  (This is what’s commonly viewed as a hint of the person’s jealous nature because it’s displayed before any feelings are established.)  During the evening, he asked several questions about my past relationships with other men, and if I could count the number of men I’d been intimate with on one hand.  (This implied that he was possessive, intense and distrusting.)

On the way home, my phone book fell out of my purse.  He picked it up and speculated on the number of guys I had listed in there.  (This is usually a pure sign of paranoia, jealousy and a tendency to be suspicious.)

Unfortunately, as the car traveled closer to my door, I convinced myself I was flattered.  After all, it seemed very apparent that he was smitten and I rationalized that he was just protecting his feelings.  Thus, I began dating him, and for a minute I discovered what being in “seventh heaven” really meant.    I had just begun envisioning him as someone with marriage potential when it happened.

One night I was on my way out with girlfriends for our monthly get together, when he called and demanded to see me, after inquiring in a hostile tone as to my whereabouts earlier that day. When I refused to accommodate him, he began shouting and demanded that I leave my friends and meet him.

Suddenly, all his past actions flashed before my eyes, and I realized I was in trouble.  When I cut off the call, he called back and threatened me.  I became frightened, but I was prepared.  I was not about to become a victim.  I went to a drawer in my bedroom, retrieved a gun I kept for protection and put it in my purse.

After that, he called everyday for a solid week and threatened bodily harm.  He didn’t know I had a gun, and I counted that in my favor.  The second week, he began following me daily when I’d leave work.  I didn’t call the police because I knew it wouldn’t do any good.  I had friends who acquired orders of protection against violent ex- boyfriends, but it didn’t help.

I decided to take matters into my own hands. One night, I had two close friends accompany me to his home at 3:00 in the morning (when I knew he’d be asleep) in a rented car and watch as I shot out his tires and his back window.  I left a note on his windshield stating that if he came near me again, the same would happen to him.  I signed the note, “From one of her many concerned friends.”

I never saw or heard from him again.  A year later, I heard his job transferred out of state.   My plan worked because I set out to convince him that I was not alone, and that the tables could be turned on him.  Apparently, like most people with aggressive tendencies, the shoe hurts when it’s on the other foot, and they can’t usually stand the pain, they are so quick to inflict.