Dating With Children – Yes Or No? 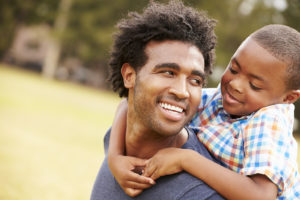 My friend Melissa will absolutely not date a guy who has children, whether they’re living with him or not.  She uses the “child factor” to disqualify a guy on the spot.  Her reason?  “I don’t have children and I’m not interested in dating men who do or in competing for his attention.”

There are many singles who share this view. In a recent poll, 44% of single men and women said they would prefer not to date those who have children from previous relationships. However, there are also strong viewpoints from the other side of the table.

Sara – “I have two small girls.  Single parents need to be conscious of the fact that the behavior of their children may influence dating decisions that are made about them, and probably will influence the thinking of partners who want a long-term relationship.  Single parents are a “package deal,” and the whole “package” must be appealing, not just the adult component of the package.  Some single guys view a woman’s children as a hindrance to dating, an obstacle to overcome to make the relationship “work.”   As a single parent, I only date casually because I don’t want a man over my girls that is not their father.”

Cheryl – “I was not prepared for the outright animosity I met when I started dating after my divorce and announced I had two children.  I thought everyone loved children and I just knew everyone would love mine because they were cute and lovable.  But I discovered that many guys view kids as excess baggage and competitors for our attention.  I saw the look in one guy’s eyes go from lust to disgust when I told him after I had to cut a night short because I had to pick up my kids from the babysitter.  He took me home and “candidly” spoke of his ‘no-date women with children’ policy.  He was the first to be so blunt.  The others just never called again or had busy involvements with other “projects” that claimed their attention.”

Marla – “I was just about through with the dating scene when I met a guy who didn’t care how many kids I had or how much debt I was in.  He loved me, and whatever came with me.  I found out that though there may be some guys who prefer not being involved with women with no children, there are those who don’t care if they care about the woman.  What I think is sad, is that there are a significant number of women who allow their quest for male attention to overshadow their love and responsibility to their children, and the situation is getting worse.  I have a friend who will leave her six-year-old at home alone, if she can’t get a babysitter, just to go out on a date.”

Keith – As a single father, I know a few women who like me, but do not like my children, (I am a divorced father of three) and most fail to hide their feelings for long.  I have my kids over every other weekend, which means that my date will either not see me, or has to see me with the children.  Of course, since they want to see me, they try to suffer through the children, and their discomfort is evident.  When a man has a sense of responsibility and interested in being closely involved with his children, he is usually more sensitive about the character and the overall sensitivity of the women he dates, more than he would ordinarily be. There are women who only want a good time and do not consider babysitting another woman’s kids a definition of that.”

How do you feel about dating with children?