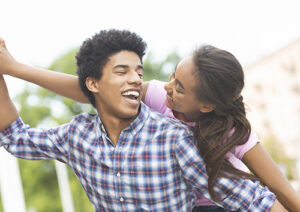 Cindy – “I met a guy for dinner on our first date.  He was quite attractive and extremely interesting.  I was impressed with him overall, and his professed interest in art.  The evening went very well, and when the waiter brought the check, I was convinced that we were mutually enchanted.  But when we got outside the restaurant, he blew me a kiss, without even asking me if I had a lift home.  He never called again, and I still sometimes wonder what I did wrong.  It was obvious that I had somehow turned him off, and that he was too smooth to exhibit when it occurred.”

Lynn – “My first date with a handsome co-worker turned into an attempted rape when I accepted a lift home from him.  When he parked in front of my door, he suddenly turned violent and ripped my blouse off.   I got away by spraying him in the face with a bottle of perfume I had in my purse.  However, the foolish part was that I was driving unbeknownst to him, but I had left my car on the street near the restaurant.  I pretended I had taken a cab and needed a lift home because I wasn’t ready for the night to end.   The next morning he strolled into work and smiled at me as if nothing happened.”

Neal – “I was out on a first date with a woman who I thoroughly enjoyed.  She was smart, pretty, and funny, and I thought the feeling was mutual.  But when the check came and I questioned the waiter about the charges, (the bill was $200.00) her whole demeanor changed.  When I called her the next day, she informed me that she’d rather I not call her again, because she was very leery of men who were cheapskates.  She said she was totally embarrassed by my questioning the waiter about the bill.”

John – “I did a very stupid thing.  I met a woman over the phone through a mutual friend. She had a lovely voice and personality.  When we finally met, several weeks later, I was disappointed that she was heavier than I like and not as attractive as she had sounded.  During dinner, I shifted uncomfortably and glanced at my watch every five minutes.  I was disappointed, and couldn’t conceal it.  I was preparing to end the evening abruptly, when she looked me straight in the eyes with a genuine smile and said, “I’m sorry I’m not your type.  But I hope we can be friends.” My heart dropped in my chest, and I felt like a heel.  I hated that I had been so transparent.  When she insisted on picking up the check, I apologized profusely but refused her offer.  However, when I found my car windshield smashed two nights later, my gut told me she did it.”