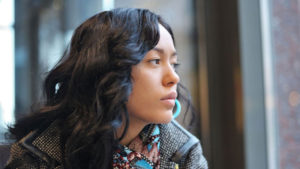 If your relationship is not satisfying and you are not where you really want to be, don’t be afraid to change the scenery.  Don’t hang on like this is the only man or woman in the world you could love.  It is not so. Sometimes we stay with the old because we are afraid to experiment with the new.  However, you can’t tell if the grass is greener if you don’t take a look over the fence.   See examples below:

Elaine – is involved with a guy who she sees twice a week.  He visits her.  She visits him.  But they have never been out on a date.  Their activities together are limited between the two residences.  He doesn’t like to go out and spend money on entertainment.  Elaine wants more, but wants to be in “love.”  She enjoys being able to say, “my boyfriend” around other women who don’t have one.  So she pretends (in pain) to be happy.

Anna sees Fred on Sundays only.  He claims the weekend for himself and his “personal time”.  After 5:00 p.m., he can never be reached directly by phone.  He is elusive and mysterious and basically unavailable.  Though distressed by his actions, Anna makes excuses for his behavior.  She tells others that he’s afraid to become serious because of a bad divorce.  She accepts the fact that she is one of many, but she hopes for the best.  She hopes that one day he’ll suddenly come to his senses and realize who’s best for him.  She spends a lot of time waiting on the phone to ring.

.John continues to pursue a relationship with a woman he knows only sees him when she has nothing else better to do.  He is fascinated with the chase.  He’s also miserable, but to him, a little bit of her time, is better than no time.

Yvonne’s boyfriend lives with another woman and has keys to Yvonne’s home.  Yvonne rationalizes that if he didn’t like her, he wouldn’t risk being with her, and she rationalizes that as long as he’s not married, she has a chance of becoming his wife.

James lacks self-confidence and seems to gravitate toward domineering women.  He’s involved in a relationship with a woman who embarrasses him often.  He wishes for something better.  But he doesn’t have the drive to better his condition.  He waits to be chosen by a more kindred spirit.

What about your relationship?

Make a column for Happy and Unhappy. In the Happy column, write down those things in the relationship that make you happy.  In the Unhappy column, name the things that don’t.  The longer column gives you a health report on your relationship.  Act on your feelings.  If it’s good…Rejoice.  If it’s not…well, you’ll know what to do…hopefully.