Romance: When You Least Expect It. 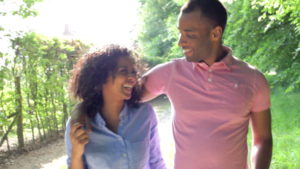 Many singles who are unattached at the moment, are usually poised and open to making new acquaintances that could possibly have romantic potential.  After all, it was not God’s intention for man or woman to be alone and few wish to be.  But I’ve discovered that some find romance when they go looking, while most bump into it and it is usually when they least expect it.  It’s called being at the right place at the right time.  And only destiny knows the schedule.  In the following stories, all incidents are true, but the names have been changed to protect the identity of these lovebirds who are still going strong, basking in their good fortune.

Pat was sitting outside her client’s office waiting to see him when he walked out with a guy who was extremely attractive.  They were introduced and exchanged business cards at the urging of her client. He called the next day and invited her to dinner.  It was the beginning of “a wonderful relationship that led to marriage.

Anne had to go to the police station to get a police report for the insurance company after a guy ran into the back of her car three blocks from her home.  She looked at the sergeant sitting behind the desk and he looked at her and it was love at first sight.  They began dating and are still together.

Stan was down in the laundry room of the apartment building he lived in.  He was in old shorts and a torn T-shirt, but when the “prettiest girl I’d ever seen walked in, she took him…old shorts and all.   They became engaged nine months later.

Don was sitting in one of those small waiting rooms in the “We can change your oil in a hurry” places, when “a very striking woman” came in and sat down next to him.  when he tried to strike up a casual conversation, she gave him short, curt responses which indicated either he wasn’t her type or she was anti-social.  He gave up and went back to the book he was reading.  Later, when he got ready to leave, he heard her arguing with an attendant about the work done on her car, and he walked over and asked if he could be of assistance.  After he helped her get what she paid for, she thanked him by giving him her card and asking him to call her for lunch.  Thus began a long romance.

Lisa was standing in a supermarket line when the man behind her struck up a conversation about the headlines on the front page of one of the popular tabloids.  He walked her to her car and they met for lunch two days later.  They were recently engaged.

Nate was buying a Christmas present for “a close friend” and became so enchanted with the saleswoman, that he came back to next day to buy another gift.  This time it was for his mother.  One thing led to another and they began dating and were married eight months later.

Carol was sitting at a light when a very handsome guy drove up and started flirting with her and asking her to pull over.  Of course with times being the way they are, she refused, but she was very flattered.  At the sixth light, he asked her to meet him at a nearby restaurant and she did.  She says, “he looked so good and had so much personality, that I went against my caution button and adhered to my womanly instinct and it was one of the best decisions I ever made.”

Joe was jogging…Melissa and her dentist hit it off…Stephanie was sold a car by the man of her dreams…Michael sat next to his intended on the train…Paula fell in love with Hal her foot doctor…Toni married the vacuum cleaner salesman…Tom was leaving a funeral and accidentally bumped into Shay’s car… Gordon was writing a parking ticket on Pam’s car when she walked up and protested…Scott was the principal Kim had to talk to when her son got in trouble…Susan was taking swimming lessons at the Y where she met and began dating Tank the instructor … Jill was in an auto accident, and Jacob was one of the firemen who pried her out of the car…Note:  Isn’t it odd that no one met at a party…Wonder what that means