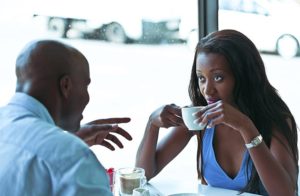 Q.  I have been dating a man for five months who, up to a week ago, has always behaved like a gentleman. We had a date scheduled recently, and when he showed up, he was very upset because he had been fired that day.  The evening didn’t go well because he grumbled and complained all through dinner.  When the check came, I offered to pay for the meal, but he became angry and said he wasn’t a charity case.  He got up and left the restaurant, leaving me stranded.  I was angry, especially after I had to wait an hour for a taxi, but when he called the next day and apologized, I forgave him.  But I don’t want to go out with him again.  My friends say I’m not being fair.  What do you think?  Am I over-reacting?

A.  I think you’re being true to yourself and that you saw what he did as an indication of a behavioral flaw that you don’t wish to deal with.  I don’t blame you.  I would have acted in a similar fashion.  To be upset is one thing.  To be abandoned is another.

Q.  I introduced a desperately lonely girlfriend to an old college friend, and when they became engaged, she stopped speaking to me.  Now, they’re getting married, and I have not received an invitation to the wedding.  I’m too hurt.  But I’m mostly puzzled.  Should I call and confront her or should I just chalk it up to another bad experience?  My best friend says she dropped me because I know all her questionable secrets, and she was afraid I’d tell him

A.  You should call her, (but not to confront her) and ask her one question.  “Did I do something to offend you?  If so, may I know what it was?”  She could be hurt by some unknown thing that you did or she could be just plain ungrateful.  But you won’t know until you ask.  If she says nothing, forget about it and move on with your life.