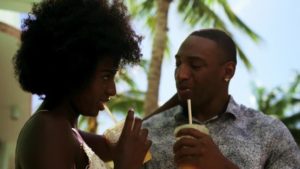 Q.  I was out the other night with a new date and ran into a couple of ex- girlfriends who are flirtatious and unscrupulous . Both of them gushed over my date like he was a movie star. I saw one of them slip him a business card, which he quickly put in his pocket and never mentioned. I thought the act was very disrespectful.  I’m furious.  But I don’t want to come across like I’m paranoid and jealous, so I’m afraid to say anything to him.  But I’m so angry I must do something.  What would you do?

A.  Absolutely nothing.  I wouldn’t want anyone to know I was bothered by the action.  Remember, she’s an ex-girlfriend.  Why take a chance on him becoming an ex by commenting on something that could be interpreted as a display of jealousy.

Q.  Recently,  I overheard my girlfriend telling a friend on the phone about the problems in our relationship.  Some of the things she mentioned were very personal and private to me, and I resented her for it.  I broke up with her because I felt betrayed, but all my friends say that I’ve overreacting to a common occurrence.  What do you think?

A.  I say, I don’t blame you.  It may well be a common occurrence, but not one that we wish to witness.  I think that what goes on in a relationship should be kept sacred, and anyone who violates that rule should be flogged and dismissed, especially if they’re caught.  Good for you!