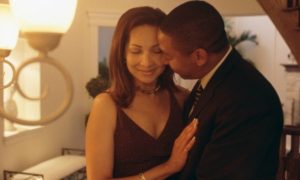 Q.  Three weeks ago, my fiancé backed out of our planned wedding for November, stating the reason as cold feet. I almost had a nervous breakdown.  I cried for a week, when I learned that an old girlfriend had come back into the picture.  Then last week, he suddenly showed up with flowers, and said he changed him mind and he wants to go through with the wedding.  I love him, but I’m hesitant.  I have bought my dress, and I don’t want to be embarrassed by calling this wedding off.  I’ve told no one what he did.

A.  I think you ought to give him back to his old girlfriend, take your dress back, or let it hang in the closet until the real thing comes along, and stop worrying about being embarrassed. When a man calls off a wedding, it’s a shout out that things just ain’t gonna work, and it will be far more embarrassing when he’s seen out with ‘ol girl the day after the wedding.

Q.  I saw my best friend’s boyfriend out with another woman, and he was the epitome of a gentleman with her. He treats my friend like dirt, and she accepts it as “he just has a problem trusting women, because of his divorce.”  I’m tempted to tell her what I saw.  What do you say?

A.  I say, no.  Girlfriend ain’t hardly ready to give him up, and she’ll be mad at you for seeing him and telling her.  MYOB, and live happily ever after.  Be like one of the monkeys…Speak No Evil.