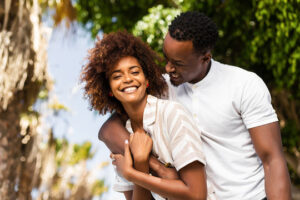 Q.  The guy I’ve been dating for several months drives me crazy.  When we’re out, he compliments every pretty female stranger he sees on her looks.  I don’t want to appear jealous or insecure, so I don’t say anything.  But I get so angry I can’t sleep at night. It feels like he has no respect for my presence or my feelings.  I was alone for over a year before I met him and I don’t want to be alone again.  What would you suggest I do?

A.  First of all, he’s behaving like a jerk!  Tell him flat out that you don’t like what he does and that you feel it’s disrespectful…then tell him you’re taking a break from him until he gets his act together.  If he responds non-apologetically, then you need to reconcile your fear of being alone, and get rid of him.  Know that men are fascinated by women who are not afraid of losing them.  If you can’t overcome that fear, then keep your mouth closed and endure the consequences.  Remember the one who cares the most in the relationship has the least power.

Q.  My boyfriend has an ex-girlfriend whom he can’t seem to get rid of.  She calls him incessantly, and he seems obligated to her in some way.  The thing that drives me nuts is that he’s always doing “favors” for her, and often it infringes on our time together.  My friends are in all agreement that he still cares for her, but that doesn’t make sense to me.  What do you think?

A.  Well, something ain’t right.  He either still cares for her, or doesn’t care enough about you.  Only you can determine the truth.  A man usually follows his heart to where he spends most of his time.  What does your heart tell you?  Is he stuck in the past with her, or excited about the present with you?